A Tale of Three Chickens 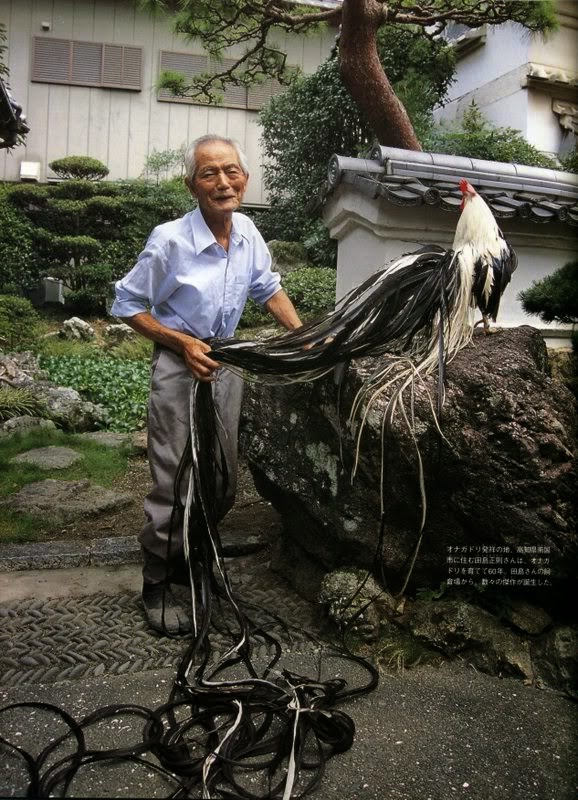 
Onagadori means “long-tailed chicken”, in Japanese, also “honorable chicken” depending on the source. Through selective breeding for unusually long saddle, sickle and tail feathers in roosters, non-molting feathers were achieved.

Tail feather lengths of 12 to 27 feet have been accomplished, making this the king of all long-tailed breeds of chicken. In the purest of the breed and under the best housing, which protects the rooster from weather, dirt and wear, these feathers never molt, thus can continue to grow through the life of the rooster. Tail, saddle and sickle feathers should grow constantly.

The breed is an ancient breed dating back to the 1600’s. It’s believed the breed was developed from another long-tailed Japanese chicken, the Shokoko, and originated in the Kochi Prefecture of Japan.
Very rare outside Japan. Numbers in Japan have dwindled since the mid 20th century. There may only 1000 pure birds in the world and it’s doubtful any pure specimens exist in the US.

Tombaku Culture, the traditional Japanese husbandry art of cultivating the best potential from individual birds, seems as important as genetics in producing the classic breed and may be on its way to becoming a dying art.

Special Qualities: We often see photos of roosters tethered to a high perch allowing his tail to flow with minimal contact to the environment. Sometimes the tail is carefully rolled up and secured for protection. 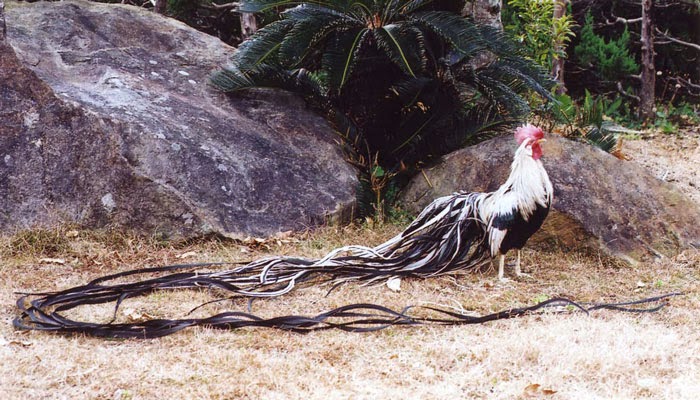 Special housing and great care called “tombaku” is a must in cultivating such long feathers in the best possible condition. Tombaku protects feathering as well as discourages conditions that would trigger molting and encourages tail feather growth of 3’ per year. Saddle feathers should to be 1/3 the length of tail.

Officially declared as a Special Natural Monument in Japan, this unique chicken was developed from the same ancestor as all domesticated chickens, the Asian Red Jungle Fowl. The Japanese desire for extremes in beauty and achievement are seen in the Onagadori.

A small percentage of the rooster’s feathers molt annually but due to selective alterations in basic chicken Dna and special care, the Onagadori rooster’s full molt cycle lasts 3-4 years. Ideally his long feathers must grow for a minimum of 4 years. Hens molt normally.

The German Phoenix and Onagadori Association reports that the origins of the Onagadori are somewhat mysterious. It is believed that Shokoku was primarily used to create the breed, selecting long tailed and slow molting mutations during the Edo Period of Japanese history 1600-1868.

Japanese oral history offers a story about a Prince or Shogun, Yamanouchi, ruling over the Kochi Prefecture. In honor of Emperor Tenno he had the spears and helmets of the soldiers decorated with unusually long feathers for special events.

Farming serfs in the Prince’s territory that raised these long feathered roosters are said to have been tax exempt for providing feathers for this royal use.

It seems that the development of longer and longer feathers, from about 1655 on, became a very active pursuit due in part to the royal reward. Japanese museums display spears and helmets decorated with long rooster feathers from this time, so the story bears some evidence in modern times making it very likely.

One look at this magnificent creature tells us much of his royal beginnings. By the late 1800’s the breed gained widespread notice in Japan through publication. Koyu Nishimura wrote and published a book: Sketches and Thoughts, where he described these ever-growing long tail feathers of Japan’s unique poultry treasure.

During the years of 1912 -1926 the Onagadori became an officially recognized breed. Soon after, descriptions of comb and color variety began to circulate through Europe in response to the first imported specimens.


From: longtailfowl
This page is devoted to a short visual and written history - as far as I have been able to gather (more to come) - of the beginnings of the European longtail breeds Yokohama and Phoenix. The first imported animals were reported as being of very weak consititution and sickly. Outcrosses were made immediately in desperate efforts to keep the genepool of the extreme long tail feathers alive. Mr. Hug du Roi is the most noted figure in historical content that I have been able to discover, but I feel certain that if the British breeders would come out of secrecy and hiding, that other, namely UK figures would be added to this historical list.

We are very fortunate to have these historical photographs from Hugo du Roi's breeding programme. Mr. du Roi was the first president of the National Poultry Association of Germany and, as a fancier of the newly imported longtail (probably a proto Onagadori), he promoted the "Phoenix" breed as the bird of fables and legends. His diligent husbandry created the basis from which all mainland Europe's longtails. The extreme lenghts of tails, which comes from the non-moulting gene of the breed Onagadori "gt", was seemingly maintained for a number of decades of breeding. The non-moulting gene was lost after the World Wars, and it is a small miracle that this breed wasn't extinguished with the practically-minded regime of that day. 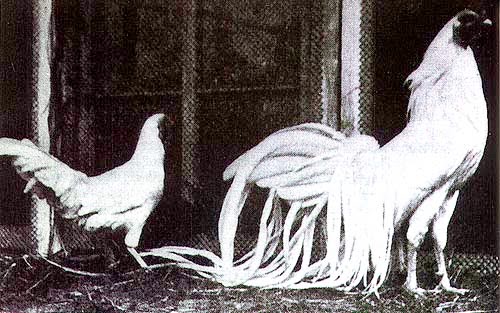 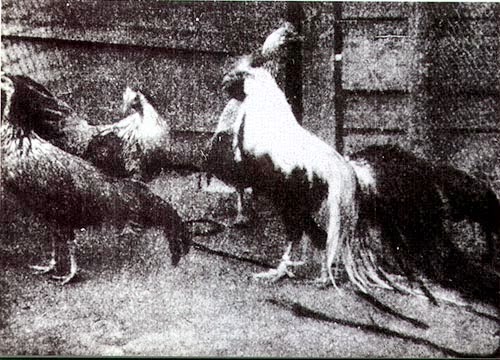 These are fine examples of the high quality longtails that were present around the turn of the last century. The colour of the Black Breasted Reds look darker than what judges ask for in shows on mainland Europe today. The silver cock below show the hackle without black midstripe, a characteristic of today's Onagadori. Gamefowl Phoenix in Europe almost all have some midstripe.
Quite a stir occured when the first Phoenix / Yokohamas were displayed at shows in Germany and across Europe. The illustration below left shows the tail of a cock with mutant sickles, long couverts and saddle hackle. The illustration below and the photographs above are very similar phenotypes.

In England the breeding of Longtails followed fairly similar routes as in Europe, except that the birds were not typed as strictly according to colour, comb type or lef colour as in Europe. These two photograph below right shows an extremely fine Gamefowl-coloured Silver Duckwing and a pea-combed bird with strong asiatic gamefowl influence (as in the Red-Shouldered Yokohama). Historically speaking from a European perspective, the British phenotype for the "Yokohama" is perhaps closer to the original imports than the exclusively single-combed, white ear-lobed Phoenix.
~~~~~~~~~~~~~~~~~~~~~~~~~~~
Ok, that was bizarre.  Now for another breed - one that is appearing in snooty restaurants worldwide.  I no longer eat chicken, but this bird is reputed to be the tastiest around.  Meet the Jidori...

from:  The Huffington Post
I first encountered Jidori chicken last year at the Skyline restaurant atop the Huntley Hotel in Los Angeles. Having never heard the term, I asked the hotel's events director seated at my table. "It's like Kobe beef," she explained, "but for chicken."


Unlike Kobe, however, Jidori does not correspond to a specific region of Japan. Instead, the term roughly translates to "from the ground." Jidori chicken refers to a type of mixed-breed domestic free-range chicken known for its robust flavor. The original Jidori chicken began when a precious pure breed of chicken called Hinaidori was crossed with the Rhode Island Red to create Akita Hinai-jidori, with Akita referring to the prefecture of Japan, and Hinai referring to the town. The chickens are fed an all-vegetarian diet, including clover, tomatoes, and apples. They are delivered the same day of slaughter, insuring freshness -- so much so that Hinai-jidori chickens are served sashimi-style. Yup, raw.

In the early 1990s, Dennis Mao, a Chinese-American whose family business was food distribution, believed there was an American market for Jidori-style, organic, free-range birds. He started Mao Foods to deliver a high-quality, cage-free bird without hormones, steroids, or meat byproducts within 24 hours of slaughter. Unlike Kobe, known for its marbled fat, freshness is the real difference between jidori-style and factory-raised chickens. Jidori chickens are never frozen, and retain less water than most chickens, resulting in a pinker breast, firmer texture, and fuller chicken flavor.
~~~~~~~~~~~~~~~~~~~~~~~~~~
And last, but not least, the Silkie.  A chicken that is noted for its sweet temper and friendly disposition - and its black skin and flesh.


Have you ever seen a black chicken? We don't mean a black-feathered chicken; we mean a Silkie chicken, which is black-pigmented right down to its bones. They aren't commonly found in the grocery store, but you might see them in Asian groceries. What's the deal with these black chickens, and do they taste different than the paler breed?

Silkie chickens are a highly-prized breed of chicken that has beautiful silky white plumage, and startlingly black skin. They are frequently found in China, India, and Southeast Asia. They have a mild-mannered nature and make excellent pets, and you'll often see them at poultry shows.


The chicken flesh itself is a dark bluish-grey or even black, and the bones are black as well. But the meat really doesn't taste different by nature; it's just chicken. The one difference, however, comes from the way the birds are raised. These obviously aren't factory-farmed birds, raised on the enormous scale of US poultry farms, so they're almost invariably free-range and slightly gamier in flavor. In fact, if you're looking for free-range and well-raised birds, choosing a black chicken is a good way to go.