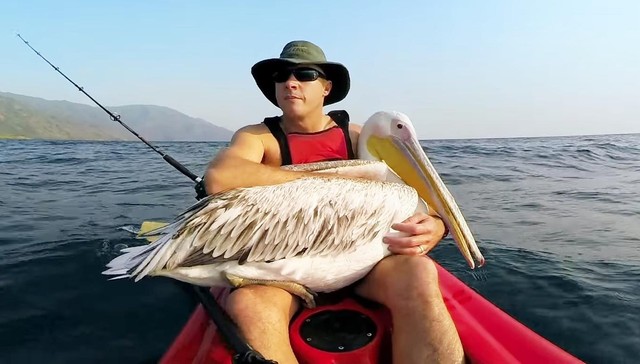 The most emotional video you’ll see all day. Seriously.

In my personal canon of viral videos, few are more infectious than unexpected bonds between people and wild animals. So you can imagine my excitement upon coming across the video above—GoPro’s followup to the inspiring story of Bigbird, an orphaned pelican in Tanzania.

Orphaned during a storm, Bigbird was found by workers at a local safari camp in the area. In the first video installment, they helped to teach him to fly. It was the best. But this new one might be even better. As pelicans are usually part of a flock, with the younger members following the lead of the older ones, Bigbird didn’t know how to fish. He never learned.

Thanks to the camp’s manager, Jeff, that’s no longer a problem. Jeff took Bigbird out on his kayak every morning, slowly teaching him how to fish. It was not a seamless process—pelican fishing is, uh, different than how a human does it—but in the end, the work paid off.

If you’re like me, by the time the video ends, you’ll be a blubbery mess and your day will be completely off the emotional rails. Enjoy!