Scientists get charge out of researching lightning strikes on Tokyo Skytree 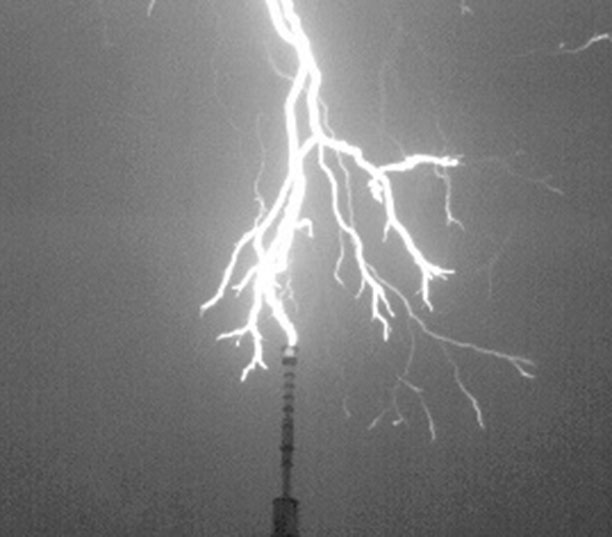 An image of a lightning strike at Tokyo Skytree taken by a high-speed camera about 1.2 kilometers southeast of the structure (Provide by the University of Tokyo and Shoden Corp.)

For those who say lightning never strikes twice in the same place, send them up Tokyo Skytree.
Since its opening in May 2012, the tallest tower in Japan, rising 634 meters above the capital's Sumida Ward, has been zapped more than 40 times. That makes the popular tourist landmark the ideal place for scientists to conduct research on lightning.

“A monitoring spot like this is rare in the world,” said Takatoshi Shindo, a researcher with the Central Research Institute of Electric Power Industry. “Here you can observe more than 10 lightning strikes a year.” 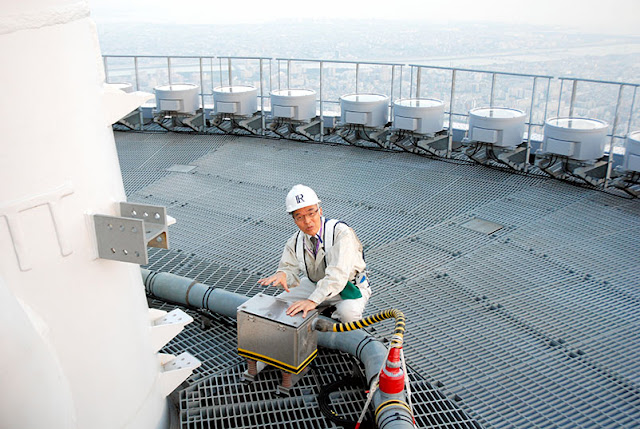 Shindo and other scientists observe the electrostatic discharges at an area off-limits to the public above the tower’s 450-meter-high observation gallery.

The researchers measure the intensity and flow of electric current by installing coiled copper wires around the bottom of the broadcast antenna that forms the uppermost part of the tower. The bottom of the antenna is 497 meters above the ground.

In all, Tokyo Skytree was hit by 42 lightning strikes between its opening and December 2014.
Shindo said their observations over the past four years have led to “more findings than they had initially expected.”

At Tokyo Skytree, however, the scientists have discovered many incidences in which electricity is discharged back toward the thundercloud from lightning that strikes the tip of the tower.

Lightning that discharges electric current upward is a characteristic of low-lying thunderclouds that are frequently observed in coastal areas along the Sea of Japan during winter.


Ten out of 15 lightning strikes observed at Tokyo Skytree in 2014 were of the upward variety. In 2012, eight out of 10 fell in this category.

Before the Tokyo Skytree observations, it was commonly believed among scientists that this type of phenomenon did not occur in central Tokyo during summer.

“It is significant to discover that many lightning strikes are observed at a high altitude in a manner that we had not previously assumed,” Shindo said.

He said his team will work to untangle the mechanism for lightning discharging upward electric current to prevent it from striking steel towers for power transmission and high-rise apartment buildings, as well as preventing damage resulting from such lightning strikes.

The tower is the primary television and radio broadcast site for the Kantō region; the older Tokyo Tower no longer gives complete digital terrestrial television broadcasting coverage because it is surrounded by high-rise buildings. Skytree was completed on 29 February 2012, with the tower opening to the public on 22 May 2012. The tower is the centrepiece of a large commercial development funded by Tobu Railway and a group of six terrestrial broadcasters headed by NHK.

Trains stop at the adjacent Tokyo Skytree Station and nearby Oshiage Station, the complex is 7 km (4.3 mi) north-east of Tokyo Station.

The exterior lattice is painted a colour officially called "Skytree White". This is an original colour based on a bluish white traditional Japanese colour called aijiro (藍白).

The cross-section of the tower forms an equilateral triangle on the ground, gradually rounding to become circular at 320 m elevation.

From October to November 2007, suggestions were collected from the general public for the name to be given to the tower. On 19 March 2008, a committee chose six final candidate names: Tōkyō Sukaitsurī (東京スカイツリー, "Tokyo sky tree"), Tōkyō Edo Tawā (東京EDOタワー, "Tokyo Edo tower"), Raijingu Tawā (ライジングタワー, "Rising tower"), Mirai Tawā (みらいタワー, "Tower of the future"), Yumemi Yagura (ゆめみやぐら, "Dream lookout"), Raijingu Īsuto Tawā (ライジングイーストタワー, "Rising east tower"). The official name was decided in a nationwide vote, and was announced on 10 June 2008 as "Tokyo Skytree". The name received around 33,000 votes (30%) out of 110,000 cast, with the second most popular name being "Tokyo Edo Tower".

Since the name was decided in Japanese, which has no spaces between words, it is not possible to say whether it was intended to be "Tokyo Skytree" or "Tokyo Sky Tree". The official website states "TOKYO SKYTREE" (all caps) as a registered trademark in English, but the version in the logo is clearly "SKY TREE". English-language publications are divided between the two versions. 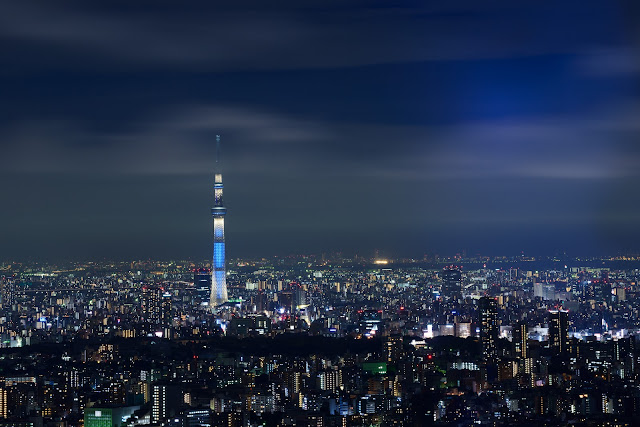