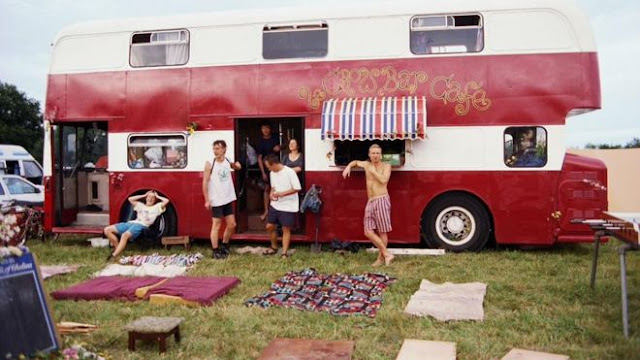 When the 1994 Criminal Justice Act helped bring down the shutters on the free party and rave culture in the UK, many headed to Europe to continue the Summer of Love. One of those was the photographer Tom Hunter, who purchased a double-decker bus and set out to party.
Now that bus, long since abandoned, has been found beside the road in central France.
When Hunter heard the news he was surprised to hear it was still in one piece, having been told it had gone for scrap many years ago. 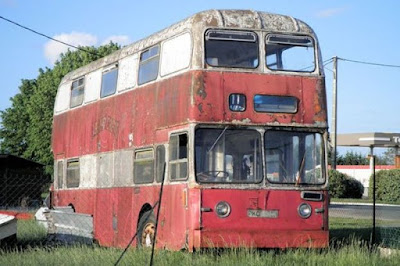 Hunter had purchased the bus in 1995 along with his friend Sam and together they drove it to a warehouse in east London, near to a large squat they were living in at the time.
The top deck was converted to a sleeping area and downstairs saw the installation of a kitchen, cafe and table football. Throw in some new tyres, exhaust and a new coat of red and white paint and they were ready.

Just one final touch, the addition of the words Le Crowbar added to the side. The name was a reference to the use of a crowbar when entering properties to squat and the "Le" added a French twist. It was hoped that this would also create a friendly vibe around the bus.
Once on the road they toured through Europe for two years, stopping at festivals and free parties led by outfits such as Bedlam Sound System in France, Germany, Portugal and the Czech Republic. 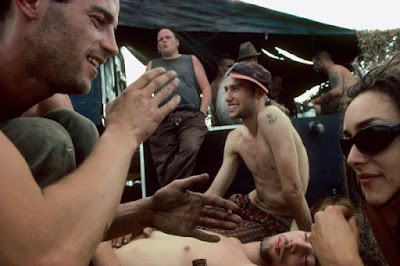 Hunter remembers the bus's arrival in the latter caused quite a stir with people turning out to take a look. "Everyone came out and invited us back to their homes to eat," he says.
At each venue they would sell food and drink from their mobile cafe and run the sound system, attracting people of all ages to enjoy the atmosphere.
Some would stay with the bus for long periods, others just turn up from London for a weekend. With no internet or mobile phones they would call the UK each week saying where they were going to be that weekend. Once in the vicinity it was easy enough for the revellers to locate a double-decker bus parked up in a field. 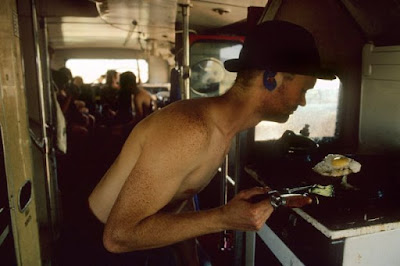 After a couple of years the bus was passed on to the punk band 2000 Dirty Squatters which was made up of musicians and artists from across Europe, before it reached what seemed to be the end of the road. The last Hunter heard it had gone to scrap.
But that was not the case and members of the Cardiff Transport Preservation Group (CTPG) are hoping to bring it back to the Welsh capital for restoration. 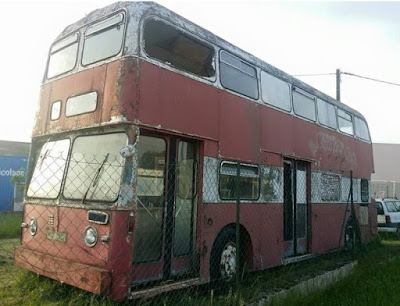 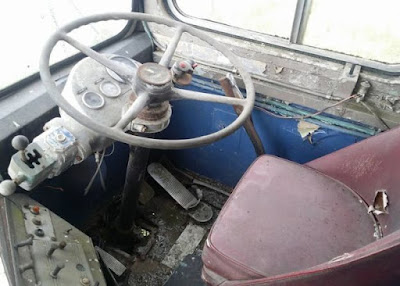 The group notes that the Daimler bus had been in service in Cardiff between 1969 and 1982 and was also used in Coventry, Anglesey and Cornwall. Mike Taylor of the CTPG told me that they are still some way from raising the funds to repatriate the bus back to South Wales, shipping costs being the main issue at this stage. 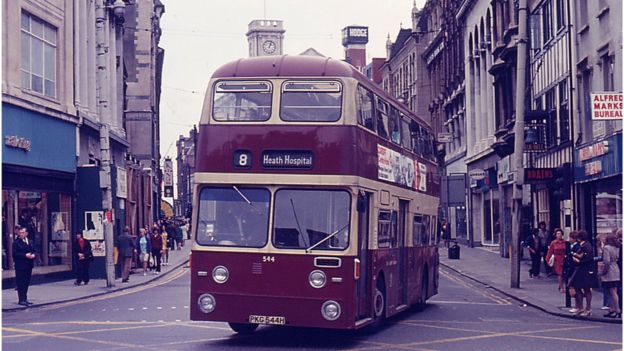 The bus, serial number 535, looked like this in 1969 when it first took to the roads, although this is a picture of a similar bus - number 544

Hunter's pictures from that time now form a project entitled Le Crowbar and he would love to see those photographs displayed inside the bus that took him and his friends across Europe in a couple of summers which are never to be forgotten. 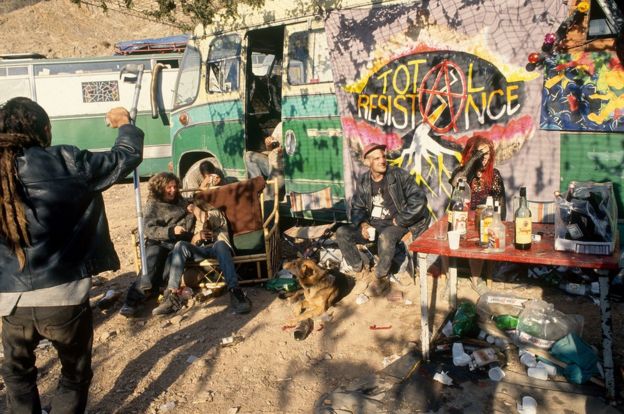 The bus was part of a larger movement, sometimes travelling alone and at other times in convoy with other groups like this one

No discussion of counter-culture buses would be complete without a few words about "Furthur" the conveyance of Ken Kesey and the Merry Pranksters. 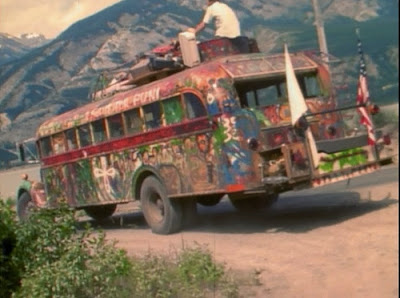 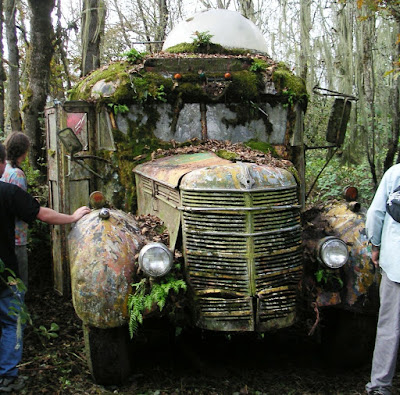 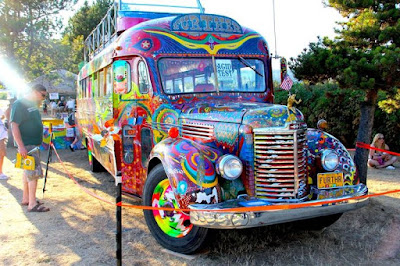 Front view of the second bus, acquired in 1990

"Further" (also known as "Furthur"), Ken Kesey and the Merry Pranksters' famous bus, Bumbershoot festival, Seattle, Washington, 1994. This is the second of the two buses by this name.  Jmabel 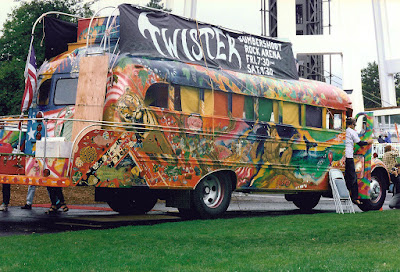 "Further" / "Furthur", Ken Kesey and the Merry Pranksters' famous bus, Bumbershoot festival, Seattle, Washington, 1994. This is the second of the two buses by this name. "Twister" was Kesey's play about the approaching millennium.  Jmabel 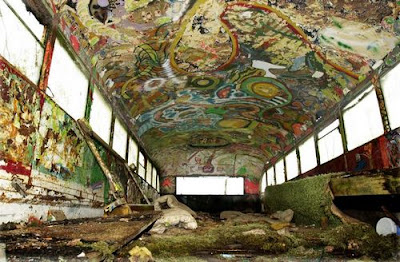 “Further” the 2nd  inside   photo by Jeff Barnard

Further, also known as Furthur, is a 1939 International Harvester school bus purchased by author Ken Kesey in 1964 to carry his "Merry Band of Pranksters" cross-country, filming their counterculture adventures as they went. Due to the chaos of the trip and editing difficulties, the footage of their journey was never released as a movie until the 2011 documentary film Magic Trip -- although the bus featured prominently in Tom Wolfe's 1968 book The Electric Kool-Aid Acid Test.

Kesey had flown to New York in November 1963 with his wife Faye and Prankster George Walker to attend the Broadway opening of One Flew Over the Cuckoo's Nest (play). He also managed to see the 1964 New York World's Fair site under construction. Kesey needed to return to New York the following year for the publication party for his novel Sometimes a Great Notion and hoped to use the occasion to visit the Fair after it opened. This plan gradually grew into an ambitious scheme to bring along a group of friends and turn their adventures into a road movie, taking inspiration from Jack Kerouac's On the Road. As more Pranksters volunteered for the trip they soon realized they had outgrown Kesey's station wagon, so Kesey bought a retired yellow school bus for $1,250 from Andre Hobson of Atherton, California. The license plates read "MAZ 80". Hobson had already added bunks, a bathroom, and a kitchen with refrigerator and stove for taking his 11 kids on vacation.

The Pranksters added many more customizations, including a generator, a sound system (with an interior and external intercom), a railing and seating platform on top of the bus, and an observation turret coming out the top made from a washing machine drum fitted into a hole cut in the roof.

Another platform was welded to the rear to hold the generator and a motorcycle. The bus was painted by the various Pranksters in a variety of psychedelic colors and designs. The paint was not day-glo (which was not yet common in 1964) but primary colors, and the peace symbol wasn't yet evident. The word 'Sunshine' was written in blue, but it was too early to refer to orange sunshine LSD or Kesey's not-yet-conceived daughter Sunshine.

The bus was named by artist Roy Sebern, who first painted the word “Furthur” (with two U's, quickly corrected) on the destination placard as a kind of one-word poem and inspiration to keep going whenever the bus broke down. The misspelled name is still often used, as in Wolfe's book.

The original bus's last journey was a trip to the Woodstock Festival in 1969. Once its historic trips had come to an end it was parked in the swamp on Kesey's Farm in Oregon where it deteriorated over the decades.

In 1990 Kesey created a second Further/Furthur, this one from a 1947 International Harvester bus.
The second bus is labeled Further on the front and Furthur on the back. It is not called Further 2, and is not a meant as a replica, although confusion between the two buses is intentional. The bus was created to coincide with the publication of Kesey's memoirs about the 1964 trip, entitled "The Further Inquiry" (ISBN 0670831743).

In November 2005 the original 1964 Further was dragged out of the swamp with a tractor and now resides in a warehouse at Kesey's farm in Oregon, alongside the 1990 Further.

The second Further bus (the 1947) toured the country as part of a "Further 50th Anniversary Trip." Most media accounts at the time did not distinguish between the original Further bus and the restored 1990 bus.