The Logistics of the Trumpiñata's Hare-Brained Scheme


Donald Trump wants to deport every single illegal immigrant - could he?
BBC  Nov 11, 2015

US Republican presidential candidate Donald Trump wants to deport every illegal immigrant from the United States. The other Republican candidates say it can't be done - one called it a "silly argument".

And the majority of US Republican voters disagree with Mr Trump: according to a 2015 survey by the Pew Research Center, 56% believe undocumented immigrants should be allowed to stay if they meet certain criteria.

So who's right? And what would happen if US authorities attempted to carry out Mr Trump's audacious plan?

There are approximately 11.3 million undocumented immigrants in the US. Rounding them up and deporting them would present a huge logistical and financial challenge to America's military, law enforcement, and border control agencies.

Mr Trump hasn't set out a timeframe for his mass deportation strategy, but a 2015 study by the American Action Forum (AAF), a conservative think tank, estimates it would take about 20 years to find and deport that many people.

Using good old-fashioned American school buses, that's 650 bus loads every month for two decades. Plus continuous operations from a variety of law enforcement and other government bodies - with all the cost that entails.

So how much is that?

And that would cover only the basic operational costs - apprehension, detention, legal processing, and deportation. According to the AAF, the total cost of a 20-year mass deportation programme would be somewhere between $420 and $620 billion.

But we're not finished yet, there's still the impact on the economy. The AAF report, published earlier this year, estimates that undocumented immigrants made up 6.4% of the country's labour force - about 11 million workers - in 2014.

It predicts that deporting all of those workers would shrink the US economy by nearly 6%, or $1.6 trillion, by 2035.

That's not to mention the enormous potential for lawsuits and reparations claims filed against the government.

This massive deportation programme would have to be done with the support - or at least tacit consent - of the American people, many of whom will have lived or worked with, or befriended and loved undocumented immigrants for years.

According to a 2013 study by Pew, illegal immigrant adults had been in the country for a median of 13 years at the time the study was carried out.

Would ordinary Americans turn a blind eye while neighbours, colleagues and friends were rounded up and taken away? Or would it precipitate mass civil unrest? In 2010, Arizona introduced a law that allowed police to check the legal status of anyone they suspected of being an illegal immigrant, and 100,000 people hit the streets to protest.

And then there is the thorny issue of how this would all look. In an age when nearly everyone has a video camera in their pocket, could the military really round people up - young and old, entire families - and force them on to buses and trains? Would the soldiers have machine guns and dogs?

Could the average American stomach those images, with all their attendant historical echoes?

Are there any other options?

The majority of US citizens - especially Hispanics, younger Americans and Democrats - support a path to either citizenship or permanent residency for undocumented immigrants.

Under plans first put forward by President Obama in 2014, about five million undocumented immigrants would be allowed to apply for work permits and eventually permanent residency.

Most of those eligible are undocumented parents whose children were born in the US and so are US citizens.

But Mr Obama's plan was initially rejected by Congress. Then in November his attempt to push the proposals through as an executive action was halted by a federal appeals court, leaving them hanging in the balance. 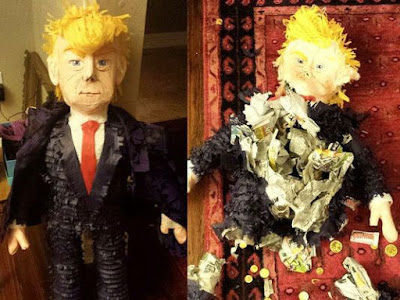 Houstonians who disagree with Donald Trump are taking a swing at him with "The Donald" piñatas.
Posted by geonni banner at 10:04 AM