Time to Ground the Osprey - Permanently


Marines: Fatal Osprey crash at Bellows was due to 'pilot performance' 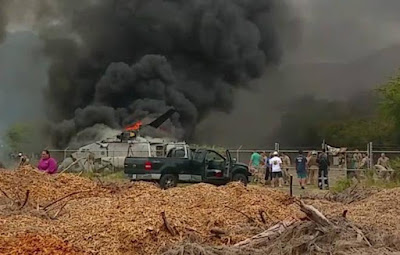 Debris rises as a Marine Corps Osprey aircraft, not pictured, makes a hard landing on Bellows Air Force Station near Waimanalo, Hawaii, Sunday, May 17, 2015. Several Marines from the aircraft were taken to a hospital, military officials say. 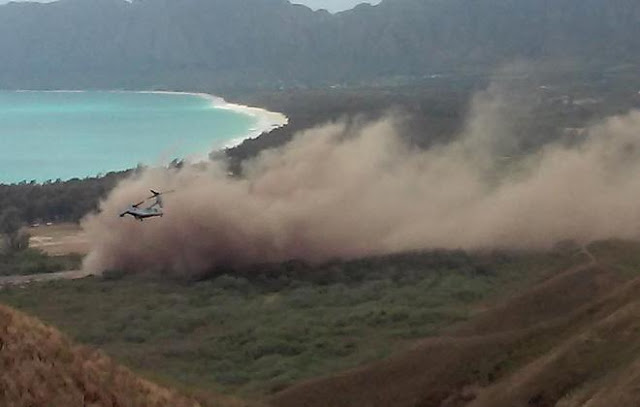 An MV-22 Osprey aircraft crashes at Bellows Air Force Station during a training exercise, killing two Marines and sending 21 others to area hospitals.

The Osprey crash in Waimanalo that killed two Marines in May was due to "pilot performance," the Marines said today after completing an investigation.

The Marines found that the pilots did not properly survey the landing zone site. A proper risk assessment of the site would have prompted the pilots to choose another flight path or landing site that would have avoided severe brownout conditions, the statement said.

"The investigation found that repeated, sustained flight time in brownout conditions (an in-flight visibility restriction due to dust or sand in the air) while attempting to land caused the left engine to stall, resulting in a loss of power that placed the aircraft in an unavoidable freefall to the ground," the Marines said.

The MV-22 Osprey crashed while trying to land during a training exercise on May 17 at Bellows Air Force Station with 21 Marines and a Navy corpsman on board. The crash killed Lance Cpl. Joshua Barron, 24, of Spokane, Wash., and Lance Cpl. Matthew J. Determan, 21, of Maricopa, Ariz. Most of the others on board were injured.

Engine power from the Osprey decreased on both engines each time the aircraft entered a low-altitude hover over the landing zone as dust and sand particles increased in the air due to rotor wash, the Marines said today. The sand and dust caused a buildup on the turbine blades which led to a compressor stall in the left engine, decreasing lift and resulting in the hard landing.

The Marines added that the crew performed all emergency procedures accordingly and the crash was not due to any crew misconduct.

"The pilots did not violate any regulations or flight standards; however, pilot decision-making failed to take into account the contributory events that led to the mishap," the Marines' report concluded.
~~~~~~~~~~~~~~~~~~~~~~~~~~~~~~ 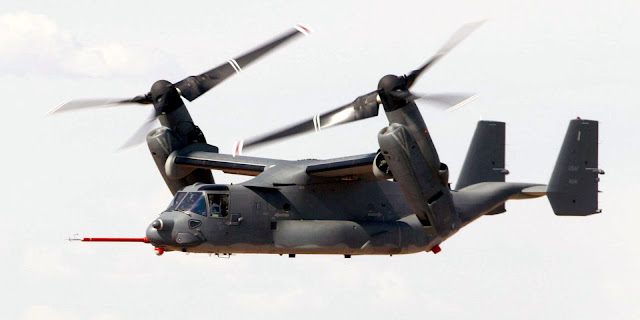 The Bell Boeing V-22 Osprey is an American military tiltrotor aircraft with an accident history that has generated some controversy over its perceived safety. The aircraft was developed by Bell Helicopter and Boeing Helicopters; the companies partner in its manufacture.

HONOLULU/LOS, ANGELES – The deadly crash of a U.S. Marine Corps MV-22 Osprey aircraft in Hawaii on Sunday sparked further concern in Okinawa Prefecture over the safety of the tilt-rotor aircraft, 24 of which have been deployed at a controversial U.S. base in the island prefecture.

The Osprey made a hard landing in Hawaii on Sunday, killing one marine and sending 21 other people to hospitals as dark smoke from the resulting fire billowed into the sky.

The tilt-rotor MV-22 Osprey, which can take off and land like a helicopter but flies like an airplane, had a “hard-landing mishap” at about 11:40 a.m., the 15th Marine Expeditionary Unit said in a statement.

The cause of the crash was under investigation, Lim said.

“I’ve renewed my sense of fear that we don’t know when an Osprey flying overhead might go down in a residential area,” Chieko Oshiro, a 61-year-old resident near the U.S. Marine Corps Air Station Futenma in Ginowan. Okinawa Prefecture, where the 24 Ospreys are deployed.

Hiroshi Ashitomi, the co-leader of a civic group opposed to the relocation of the Futenma base to a coastal area of the city of Nago on the same island, called the aircraft “defective,” and said they should not be deployed anywhere in Japan.

In Tokyo, Chief Cabinet Secretary Yoshihide Suga told a news conference that Japan has asked the United States to provide information about the crash as soon as possible.

“The government intends to steadily assert its stance to the U.S. side that maximum care should be taken with regard to safety,” Suga said.

Meanwhile, news of the crash sent a shock wave through the Defense Ministry, coming just days after Tokyo and Washington announced that the U.S. military will deploy 10 CV-22 aircraft, the air force’s version of the Osprey, to Tokyo’s Yokota Air Base beginning in 2017.

“The crash occurred at the worst possible time,” a senior ministry official said.

The crash also comes just over a week before Okinawa Gov. Takeshi Onaga plans to visit Hawaii and exchange views with the U.S. state’s governor over base issues.

Onaga, who will visit Hawaii from May 27 before traveling on to the U.S. mainland to press Okinawa’s case in Washington, has vowed to stop the construction of a new air base off Nago’s Henoko district to replace the Futenma base.

The 15th Marine Expeditionary Unit is based at Camp Pendleton in California and is in Hawaii for about a week for training. The Osprey was being used for training at Bellows Air Force Station on Oahu at the time of the hard landing.

Kimberly Hynd said she was hiking the popular Lanikai Pillbox Trail and could see three Osprey aircraft performing maneuvers from her vantage point in the hills above Bellows. She noticed them kicking up dirt but then saw smoke and fire. Hynd, who estimated she was 2 to 3 miles (3-5 km) away, didn’t hear the sound of a large crash.

“It looked like they were doing some sort of maneuver or formation — and so I was taking pictures of it because usually you can’t see them that close up,” Hynd said.

Photos and video posted on social media showed flames and deep black smoke emanating from what was described as the crash site.

Ospreys may be equipped with radar, lasers and a missile defense system. Each can carry 24 marines into combat. 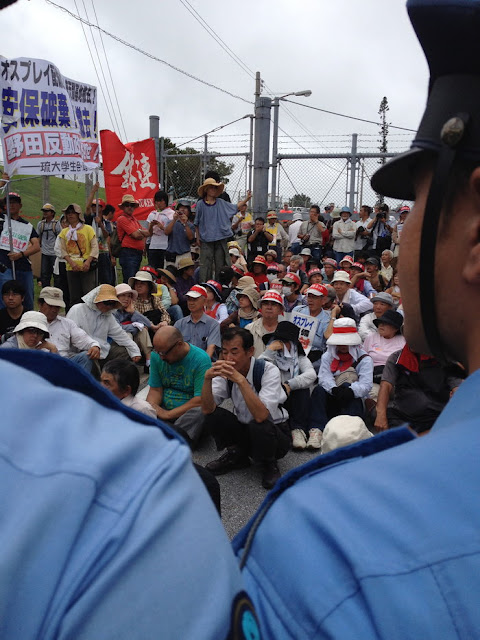 The Okinawans have been unhappy about the Osprey rooting next to their towns for years, and one can see why. 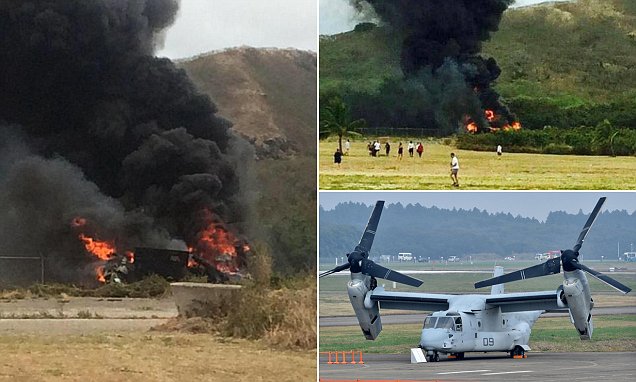