I spent many of my formative years in the Texas panhandle in or around Amarillo.  A fact which I believe should entitle me to two “get out of jail free” cards and at least a modicum of sympathy.

There were a great many things about this environment which I found inexplicable, and the people therein were almost completely inexplicable.  But I want to focus on one thing here.

When I was a second or third grader and had begun to read, I started taking an interest in shop signs and graffiti.  The signs were pretty easy to make out.  As to the meaning of the text, even if I was unfamiliar with a given word, I was frequently helped to understanding by an accompanying illustration.  Thus, if a sign said “Automotive Repair” I might puzzle over the first word, but the picture of a nice man standing beside a gleaming convertible, clutching a large wrench and beaming at me would help to  clarify things.

(These “Automotive Repair” signs were less common than you might expect.  Such shops usually declared themselves simply with the word “Garage”, or somewhat confusingly as “Body Shops.”  I used to wonder who got their bodies at these places.  I had always been under the impression that bodies were a sort of one-to-a-person thing, and that you were sort of stuck forever with the one you were born with.  Eventually I asked some grown-up about this and was given a satisfactory, if somewhat boring, explanation.)

Graffiti was not always so easy.  One word in particular was rarely accompanied by helpful illustrative clues.  Even when there were pictures, they did not tip me off as to the meaning of the word.

All the adults appeared not to see it.  Or, at least they pretended not too.   All the kids I knew either ignored it or snickered at it.  Some even dared to whisper it.  But no one offered me a clue as to its meaning, and not wishing to seem stupid, I did not ask.  I was a sheltered child.  The crude anatomical illustrations which sometimes appeared with the mystery word were completely meaningless to me.  And so I lived for some time in darkness and was not initiated into the cult of the F-word for some time.

There was another word which appeared on walls and fences in the area.  This word I could readily read, but could never understand why it produced the same effect as the F-word.  The word was “bone,” and it was universally written above or below a drawing of a doggie-bone.  This was really mystifying.  What was up with people about bones?  Actual bones never produced myopia in adults or covert giggling in children.  Bones were simply scraped off of plates into the garbage or flung to begging canines. 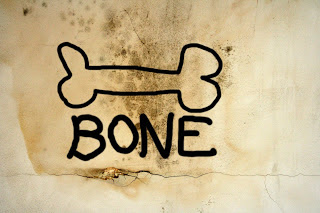 I cannot remember exactly when the significance of “bone” was revealed to me.  But I suspect that it came along with my enlightenment about “the birds and the bees.” I still think it’s pretty stupid.  I mean, that simplistic rendering of an erect penis that appeared occasionally with the words “bone” or “fuck” is pretty silly when you consider that men (and horses, even stud horses) don’t have a bone (a.k.a. baculum), in their penises.  A great many other mammals do.  Dogs and walruses do.  Carnivores like lions tigers and bears, (Oh my!) do.  Rats and mice have ‘em – but not bunnies. And lots of primates do - but not humans. Men have to get by with just blood-filled spongy tissue.  Elephants, ungulates and cetaceans don’t have a baculum.  (Interestingly, the female equivalent of the baculum is the os clitoridis – a bone in the clitoris.)  Oh, go look it up, won't you?

The baculums (or bacula, for those of you who care,) of certain sea mammals such as seals, walruses and sea lions are called oosik, and are made into lots of decorative items like knife handles.  You can see them HERE

A bull’s “pizzle” (no bone – they don’t have ‘em) can be dried, cured and bent into a dandy walking stick like these: HERE 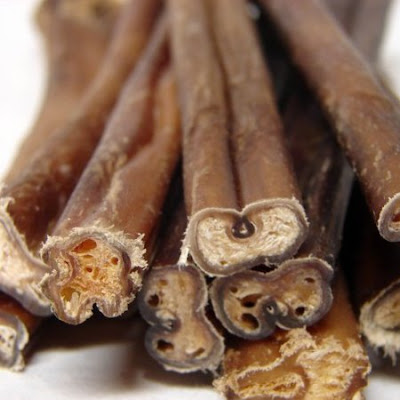 Or they can just be dried and sold as chewies for your dog, the revelation of which fact seems to horrify some of my friends. Men especially seem to find this disturbing. But the dogs all seem to think “bully sticks" are just dandy – no bones about it.

Posted by geonni banner at 6:27 PM