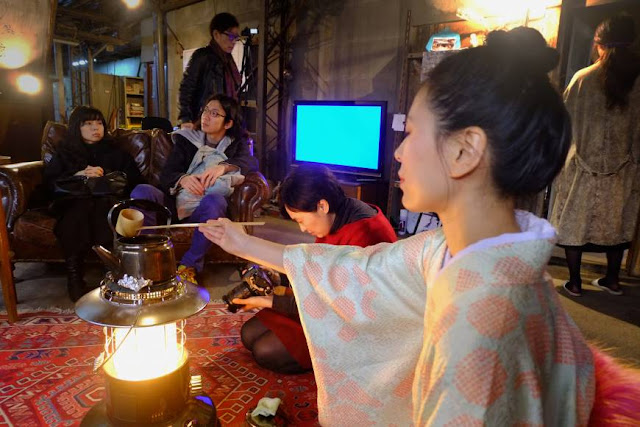 A new ceremony for tea in the rundown heart of Osaka

In Japan — especially in Japan — food and drink have always been about more than merely nutrition or a mere succession of tastes. They have also been a pretext for bringing people together in social rituals that don’t have to be ancient, formal or solemn: rituals focused on food and drink can also be fresh, inventive and humorous.

On Valentine’s Day I cycled down to an industrial building in Tengachaya, a maze-like working-class neighborhood in the middle of Osaka’s Nishinari Ward, one of the poorest areas in the city and the country. I had been invited to a tea ceremony presided over by the artist-turned-tea mistress, Mai Ueda.

For almost a decade, Ueda has been conducting tea ceremonies in unlikely places: on a traffic island in the middle of a busy New York street, inside a mosquito net at an Indian biennial or next to a geyser in Iceland.

The venue, Poehum (the name combines the word “poetry” with “humming”), is a two-story corrugated iron warehouse converted into artists’ studios, a gallery and an event space. Shotaro Ikeda, the artist who runs Poehum, told me that his grandparents operated a cracker factory here during the Showa Era (1926-89), producing and packaging handmade okaki (rice crackers). The building now hosts installations and video projections — for instance, Shoji Funakawa (known as “Funasho”) has installed a hot electric coil in a darkened room, and hands visitors big blocks of ice to place on it. The ice sizzles satisfyingly as it sinks through the coils.

I came to know these artists through their work with Self-Matsuri, an organization that regularly hosts bizarre events in the food arcades of the charmingly sleazy entertainment district just to the north of Nishinari called Shinsekai. Run by the action painter Kotakeman, Self-Matsuri focuses on surreal reinventions of traditional Japanese rituals, such as staging eccentric sumo wrestling matches on vacant lots. The elderly food-shop owners nearby stand by and watch with a mixture of pleasure and bemusement.

On Valentine’s Day at Poehum we crowded round a kerosene heater and supped at bitter, foamy green matcha tea served by Ueda, who was dressed in a gorgeous white kimono set off with an obi makura (a pillow worn on the back) wrapped in bright pink Fun Fur. When a guest asked her where she sourced the tea, she replied: “The Internet.” The hostess also passed around artisanal sweets of dark, bitter chocolate and mochi (pounded rice cake) — glazed sticky rice dumplings injected with a chocolate ganache and topped with cocoa. Meanwhile, Ikeda sat composing calligraphic poetry about the tea-drinking experience, which he handed to Ueda to read out.

After the tea ritual, a dozen of us were led on a “Poehum Tour” of the Tengachaya neighborhood. It culminated near the tram tracks outside a shabbily cheerful takoyaki (octopus dumplings) joint serving the delicious balls piping hot — with or without mayonnaise. The tour, inspired by the ROJO walks architect Terunobu Fujimori has been conducting since the 1980s — ROJO stands for Rojo Kansatsu Gakkai (“Roadway Observation Society”) — homed in on street quirks: angry hand-painted notices about garbage and parking, discarded prosthetic limbs, oddly-positioned sun-blinds, precariously tilting brick chimney flues and an oddly painted storefront dedicated to ninsō-uranai (fortune-telling by reading a face, rather than palms).

We chomped on our ¥100 octopus balls and felt very bohemian indeed — wandering through that delightful cultural sweet spot where cheapness and creativity enable and encourage each other; where artists and the working classes cultivate their distinct, cheerful oddities and eccentricities, and new rituals are playfully hatched.

For the tedious many (so apparent on e-bay) who imagine all Japanese males are samurai, and all Japanese females are geisha, there is a big shock in store.  It isn't true.

And chances are, even if you aren't one of those deluded simpletons, that Japan isn't what you think it is.  And Japan's people are even less so.

Osaka is a good case in point.  The scene described above is unusual, but less so for Osaka than much of the rest of Japan. 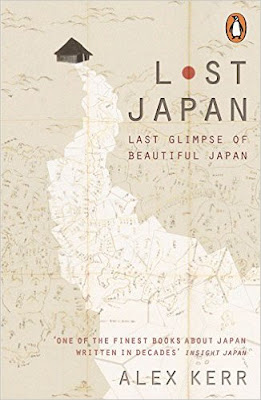 Since it was written in 1996, Alex Kerr's "Lost Japan: Last glimpse of Beautiful Japan," Japan has undergone major and continuous change.  Though ten years old, the book is still well worth reading.  It will open your eyes to any number of "Japanesenesess" you may not have suspected.  The book was re-issued with a new preface in 2015.  If you haven't read it, check it out. Amazon has it HERE , and there are a number of sellers on the same page that list the book for a little over half the Amazon new price.
Posted by geonni banner at 1:51 PM