Last night I sat down with a friend to watch "Tekkonkinkreet", ( a play on the Japanese word for "reinforced concrete") arguably the best animated film ever.  She was knocked out by it - no surprise - and if you haven't seen it I highly recommend it.  But, this is not a kid's film.  Especially not a little kid's film.  If you have kids, watch it alone first, then decide if yours are ready to cope.

Here's a review from Amazon that says it as well as I could...

One of the best anime films I`ve seen in years.


This is the film adaptation of what might be the best graphic novel I`ve ever read. There are no words to describe how much I love the original comic book so I attended the North American premiere of Tekkon Kinkreet at the Moma in NY with high expectations.

Not only did the movie not fail to meet them but in fact added exciting and unexpected layers to the story. I am an animator; I`m rarely satisfied with the technical aspects of most animated features but the production on Tekkon is flawless. The animation, character design, backgrounds and camera work are all top notch. The two main characters are rendered in all their complexity and the movie doesn't shy away from the deep implications that the original story holds within its pages.

The movie is faithful to the comic book and the storyline is basically the same. However, Michael Arias and studio 4C were sometimes inventive, albeit in appropriate and creative ways. The new uniforms of the three warriors that Snake sends to kill Black and White are beautiful and reminiscent of a Moebius illustration- the final confrontation between Black and the two remaining warriors is held in the amusement park instead of the car-shelter site (which makes room for new dynamic shots) - but my favorite shift from the original material has to be the minotaur sequence. A lot of people complained that the movie is not as daring as Mind Game (studio 4C`s previous adventure into full length features) but I disagree - the animation gets very experimental during the minotaur scene showing the thin line between reality and Black's violence saturated subconscious. I loved the way they communicated the internal struggle by using the graphic language of animation alone.

Overall, Mind Game's pastiche of animation styles is probably more audacious but Tekkon more than compensates for it's more rigorous style with incredibly strong characters (MG characters came off as a little wacky at times) and a story that is so good that it hurts. If your eyes are not wet by the time Black and White get separated you are a soul-less fiend and you may want to consider a career in advertising.

I haven't been so excited about an anime since Ghost in the Shell 2: Innocence hit the theaters; it's a shame that while it was one of the most important movies of the year in Japan, Tekkon Kinkreet got very limited distribution in Europe and in the US - so do yourself a favor and buy this DVD!

You can get a stream, Blu-Ray or DVD  at Amazon.com 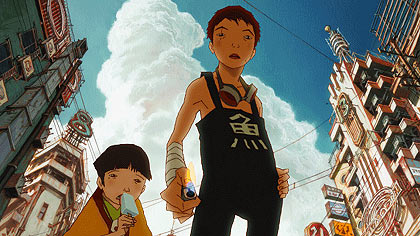 Opening sequence
Posted by geonni banner at 12:27 PM No comments: 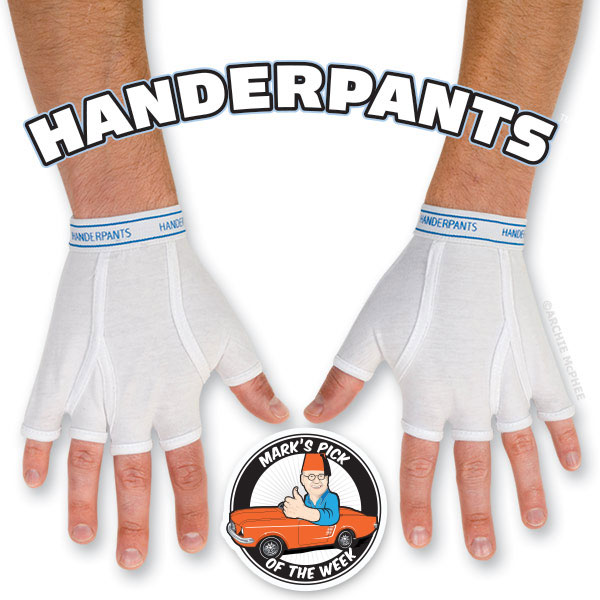 Archie Mc Phee’s is having a sale on Handerpants this week! Get a pair of underpants for your hands for only $8.00. Shop here

Posted by geonni banner at 11:56 AM No comments:

A Georgia man’s leg was blown off while shooting at an explosives-packed lawn mover in a horrific stunt captured on video.

Authorities say three pounds of Tannerite — a substance designed for firearms practice — was loaded into the machine before David Pressley, 32, began firing away, WXIA-TV reported.

Video of the March 19 incident shows Pressley shooting at the mower in a wooded area while standing, uncovered, about 40 feet away. Two friends were with him, one of them apparently operating the camera.

After a final shot, Pressley is off his feet. Moments later,  blood is seen splattered across one person’s jeans.

Authorities say a flying machine part sliced off Pressley’s left leg, just below his knee.
“Call an ambulance!” someone yells.

This video contains graphic images.
According to an incident report obtained by WXIA, two of Presley’s friends fashioned a tourniquet and helped him into a vehicle. They drove to a nearby roadway for help.

The Walton County Sheriff’s Office reacted in disbelief to the apparent misuse of Tannerite, a binary explosive composed of ammonium nitrate and aluminum powder, which can be legally purchased in most states.

“He was dangerously close to the object containing the Tannerite when the final gun shot round caused it to explode sending a piece of shrapnel through his leg severing it below the knee. Yes, completely taking his leg,” they stated on their Facebook page, one day after the accident. 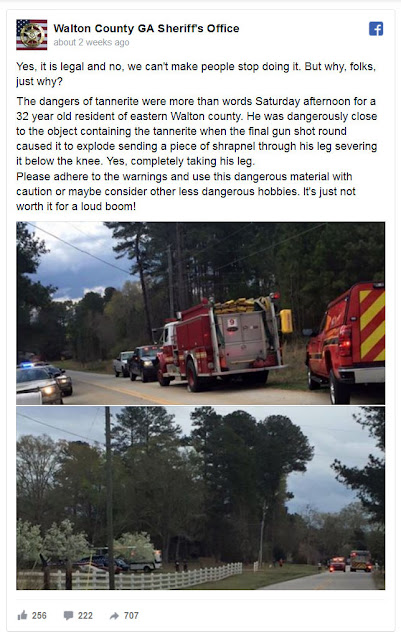 Tannerite’s website advises against anyone using more than two pounds of the substance at once. Used incorrectly, it can cause extreme damage and even prove deadly.

“Yes, it is legal and no, we can’t make people stop doing it. But why, folks, just why?” the sheriff’s department wrote of the product’s misuse. “Please adhere to the warnings and use this dangerous material with caution or maybe consider other less dangerous hobbies. It’s just not worth it for a loud boom!”

Last year, an 8-year-old boy was killed when he was hit by an oven door after the appliance was packed with Tannerite and detonated, News On 6 reported.

Several YouTube videos document just how destructive Tannerite can be when other substances are added to the mix. An RV is torched in one video. An outhouse is blown up in another.

Tannerite, typically sold in small quantities, is legal in 48 states, and is non-incendiary. The ingredients, packed separately, need to be mixed up. Once it’s struck with bullets from a high-powered rifle, it will explode, creating a loud boom and a cloud of water vapor.

The purpose of Tannerite is to alert long-distance shooters when they have hit their target, according to the company’s website.

Who are these idiots?
Posted by geonni banner at 11:42 AM No comments:

Trump Thinks Japan Should Have Nukes, and that Women Should Be Punished for Having Abortions


Trump’s remarks about Asia cause bewilderment, unease in Japan

Donald Trump’s calls to overhaul the Japan-U.S. security alliance have agitated Japanese government officials, and one local leader is now urging debate on the Republican Party front-runner’s suggestion that Japan arm itself with nuclear weapons.

Government officials said a possible Trump presidency would fundamentally change the course of U.S. diplomacy with Asia and could force Japan to rethink its diplomatic principles to strengthen the alliance.

During his campaign, the real estate mogul has said the alliance is unfair to the United States. And in an interview with a U.S. daily on March 26, Trump again made clear his intention to drastically reduce the U.S. military presence in Japan, adding that he would allow Japan to possess nuclear weapons as a deterrent to North Korea.

“It seems he only has experts on Middle East affairs and terrorism-related issues among his diplomatic brain trust but no analyst specializing in Asian matters,” a Foreign Ministry official said.

Prime Minister Shinzo Abe said at a news conference on March 29 that it would be “improper” to comment on Trump’s remarks at this point.

However, Foreign Ministry officials have been analyzing Trump’s policies and intentions regarding Japan-U.S. relations since he became the GOP front-runner in early March.

Although the officials said they believe Democratic Party candidate Hillary Clinton would defeat Trump if the two faced off in the presidential election in November, they cannot rule out a Trump victory.

Trump’s remarks have already sparked a reaction within the political circles in Japan.

“Trump has questioned the validity of the current Japan-U.S. alliance,” Matsui said. “We may already need to start debate on whether we should keep staying away from nuclear weapons or have them as a deterrent.”

The governor added that if Japan decides to develop military capabilities to defend itself on its own, it will need the “ultimate weapons.”

“I believe it is already high time, particularly for the Diet members, to start serious discussions on this issue,” he added.

(Ryutaro Abe contributed to this article.) 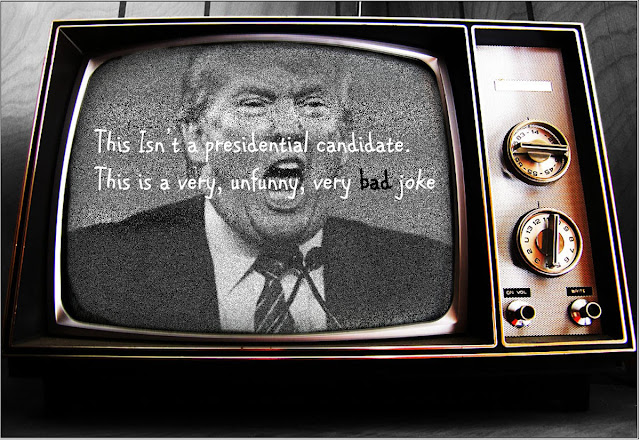 Posted by geonni banner at 5:15 PM No comments:


Flying Over a Forgotten Ship Graveyard in NY City 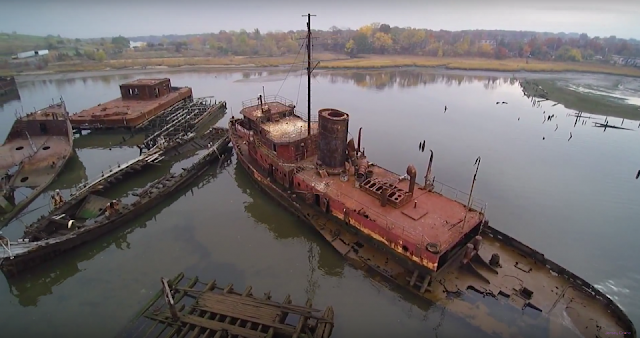 Posted by geonni banner at 11:51 AM No comments: