Rare Lobster Colors. American lobsters tend to be greenish brown with some reds, but every once awhile a strange colored lobster will turn up. They come in almost every color under the rainbow from red to blue to even multi-colored split lobsters. Some of these colors are so rare they only occur once out of every 100 million lobsters.

Why This Rare Lobster Is Colored Like Blue Cotton Candy

The critter’s pastel rainbow hues may be the result of a genetic mutation or an unusual diet. 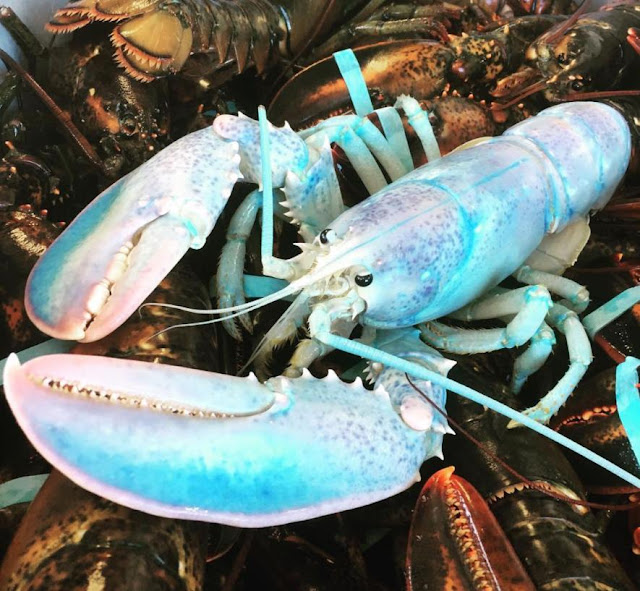 Last November, Canadian lobsterman Robin Russell was pulling up his catch when he found a unicorn of sorts: Peeking out among the mottled burnt orange and brown was a pastel lobster, sporting a shell of baby blue, pink, and periwinkle.

Though there aren’t firm stats on the true abundance, the lobster is certainly a rare find. Similarly colored creatures only turn up once every four to five years, says Michael Tlusty, associate professor of sustainability and food solutions at the University of Massachusetts Boston.

Lobster coloring is all thanks to a pigment called astaxanthin. It’s an antioxidant that’s thought to be biologically important. “Humans would call it a ‘superfood,’” notes Tlusty, adding “but I don’t believe in ‘superfoods.’”

The pigment changes color depending on how it’s contorted. In the skin, the pigment is hanging loose and fee, retaining a bright red color. But inside the shell, proteins bind the astaxanthin. “These proteins grab it and twist it, and it actually turns blue,” Tlusty explains. In the outermost layer of shell, the proteins there bend it again, turning it yellow.

Stacking up the reds, blues, and yellows produces the muddy brown coloration of lobsters in the wild. (They don’t actually turn red till you cook them, which denatures the proteins binding the pigment, turning it back to red.)

For the unicorn-colored lobster, it is likely just low in pigment. Though it dons a rainbow of pastel hues, they’re all pretty faint, says Tlusty. The reason behind this lack of color, however, is unclear. The oddball could be the result of either a genetic mutation or its reliance on a low-pigment food source.

Tlusty has actually unintentionally created white lobsters in the past. He spent 20 years working at the New England Aquarium doing lobster research, raising baby lobsters for the work. In an attempt to save money, Tlusty turned to an inexpensive, astaxanthin-free lobster chow.

The lobsters grew perfectly healthy, but they were ghost white.

“A lot of animals eat this and incorporate this color into their pigmentation,” says Tlusty. “Flamingos do it, salmon do it, and it turns out lobsters do it.” But if any of these creatures turn to a pigment-free diet, their coloration fades to white.

It’s possible that Lucky was feasting on the bait that fishermen dumped into the sea, says Tlusty, rather than a more common lobster diet that includes astaxanthin-rich creatures like crabs and shrimp.

A genetic mutation could also be causing the cotton candy coloration, affecting the proteins that bind to the pigments. These mutations can produce some crazy colorings—brilliant blue or yellow lobsters, speckled calicos, or even two-toned split lobsters.

One way to figure out this colorful mystery is to watch what happens to Lucky as it grows. If the reason behind its unusual color is diet, eating pigment-rich foods could make it turn orangey brown the next time it molts.

But if a genetic mutation lies behind the rainbow, then food won’t change its tone—and this crazy-colored critter will remain a unicorn. 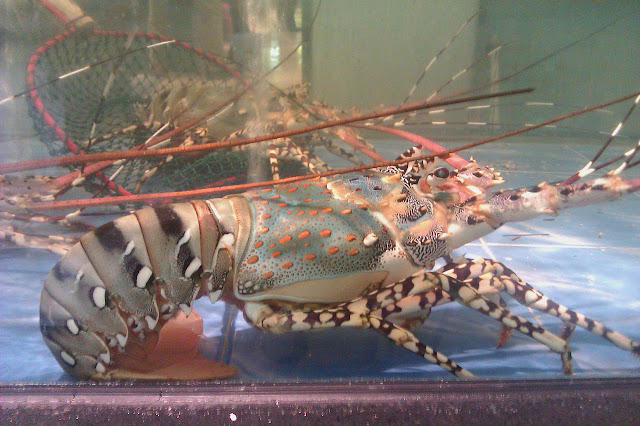 P. ornatus has a wide geographical range in the Indo-Pacific, from the Red Sea and KwaZulu-Natal in the west to Japan and Fiji in the east. In most parts of its range, the lobster is netted or speared, while in Northeast Australia, a commercial fishery has existed since 1966 and the harvesting of the species is regulated by the Great Barrier Reef Marine Park Authority. The species now also occurs in the Mediterranean, having invaded as a Lessepsian migrant through the Suez Canal.

Here, Indonesian Mutiara Lobster are hand-caught by divers. With no pots, nets, traps or baits used, there is no by-catch, which minimises the impact on the marine environment with-in the fishery.

Premium quality fresh Indonesian lobster is delivered directly from the Indonesia export facility to international markets, predominantly Asia. Here, Panulirus ornatus is highly sought after for sashimi-style cuisine thanks to its taste and striking appearance.

Posted by geonni banner at 8:32 PM No comments: