A Japanese Editorial about Trump and the Media 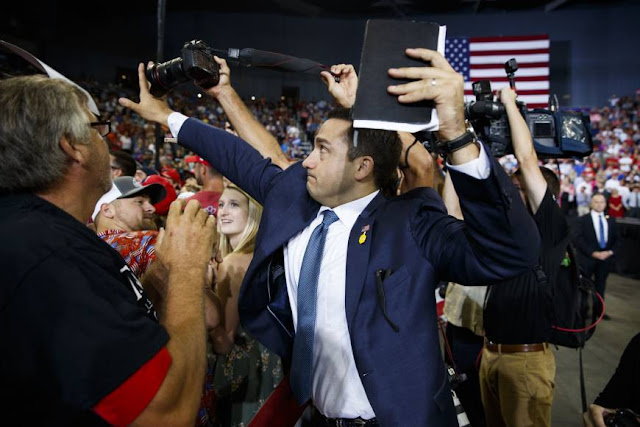 In its Aug. 16 print edition, the Boston Globe finally launched a counteroffensive by carrying an editorial titled “Journalists are not the enemy.” The same day, more than 350 newspapers across the United States joined in by running similar columns.

Over 400 media outlets, including TV and radio broadcasters, sided with the Globe. The U.S. Senate also unanimously adopted an unusual resolution declaring that the media are not the enemy of the people, throwing its support behind the calls to respect freedom of the press.

In his Twitter messages, Trump almost daily repeats his denunciation of the traditional U.S. media, such as CNN, major TV networks, The New York Times and The Washington Post as “fake news” or “enemy of the people.”

He even tweeted recently of his hatred for the “fake, fake and disgusting media.” What’s more disturbing is that in addition to attacking specific media companies, the president goes on to say that “news is fake” — as if to plant an impression that the very act of news reporting and the news itself are bogus.

The Washington Post reported that Trump in his first year as president repeated false or factually misleading arguments 2,140 times — a pace of nearly six a day. The media has meanwhile responded to the onslaught from Trump and his supporters with excellent news coverage, including scoops on Russia’s alleged intervention in the 2016 campaign. In other words, through pure acts of journalism.

That alone, however, has not been an effective rebuttal against Trump’s tweets — that the media are a public enemy and that the news is fake. Strenuous fact-checking and scoops won’t amount to much unless the stories are read by the people, and several tweets a day of seditious words by the president leaves a stronger impression on the public.

The simultaneous editorial campaign — which can be called some sort of a media counteroffensive — was proposed by the Boston Globe. In early August, its editorial committee told newspapers across the U.S. as well as the American Society of News Editors that it would run an editorial warning against the danger of the Trump administration’s attacks on the media, and called out to other newspapers to carry editorials and columns fighting Trump’s “dirty war” against the media.

The front-page lead article in the Aug. 16 edition of the Globe headlined “Journalists are not the enemy” first cites some data to show what’s happening among U.S. citizens as a consequence of the Trump administration’s assault on the media. It quotes a survey by the Paris-based research and consulting firm Ipsos showing that 26 percent of adult Americans polled agree that “the president should have the authority to close news outlets engaged in bad behavior,” whereas a majority, 53 percent, do not agree. This indicates that more than a quarter of Americans — even as they live in a democracy — condone a dictator and dictatorship.

In a question asking about the “favorability” of each media outlet, 56 percent of the respondents had a favorable view of The New York Times, but 29 percent said they have an unfavorable opinion of the paper. Given its liberal editorial position, 83 percent of the Democrats chose “favorable,” but among the Republicans only 33 percent did so, outnumbered by the 53 percent who called it “unfavorable.”

The Boston Globe warns that the fact that 26 percent of Americans agree that the president should have the power to shut down news outlets (and 53 percent of Republicans consider The New York Times “unfavorable”) is a direct consequence of Trump repeatedly calling the media the “enemy of the people.”

“A central pillar of President Trump’s politics is a sustained assault on the free press,” writes the Globe. “Trump can’t outlaw the press from doing its job here, of course. But the model of inciting his supporters in their regard is how the 21st-century authoritarians like Vladimir Putin and Recep Tayyip Erdogan operate: You don’t need formal censorship to strangle a supply of information.”

The New York Times, in its editorial headlined “A free press needs you,” said Trump’s onslaught against the media “is dangerous to the lifeblood of democracy,” and provided a link to the editorials of dozens of fellow U.S. newspapers at the end of its own.

Trump’s supporters, however, welcome his attacks on the media. During the 2016 presidential race, I witnessed the same scene in each of Trump’s campaign rallies that I covered — the candidate pointing to the media section and shouting “They,” and thousands of his supporters following in unison, “are the most dishonest people in the world!” Then the supporters booed as they gave us the finger, and used their smartphones to take videos of the reporters as if they were taking shots of criminals being paraded. The TV camera crews and journalists tapping their laptop computers to write articles pretended they didn’t care. But this author, who couldn’t enter the media section surrounded by a steel fence and was among the crowd, was so frightened that I felt as if my hair was standing on end. I used notebooks for schoolchildren to take notes instead of the kind typically used by journalists.

Trump’s repeated “enemy of the people” message has been effective in worsening his supporters’ hatred of the media. Jim Acosta, the chief White House correspondent for CNN, one of the members of the media who continues to confront Trump head on, showed a horrific video image in his July 31 tweet. It depicted dozens of Trump supporters at a rally in Florida yelling at journalists as they walked by the steel fence surrounding the media seats. Unlike during the 2016 campaign, when Trump himself led the chant, the attack on the media is taking place spontaneously among his supporters — and escalating. They were shouting at the journalists to stop telling lies and speak the truth, and booing and sticking up their middle finger as they appeared to be threatening to tear down the fence.

The Boston Globe said in emails to its workers that on the day after it ran the editorial, it received several phone calls alleging that bombs had been planted in its building. The case is being investigated by the Boston police and the FBI. Concerned that such threats might spread to other media outlets, the Globe issued a statement saying that “journalistic outlets have had threats throughout time, but it’s the president’s rhetoric that gives us the most concern.” On Twitter, many users expressed concern that the threats against the Globe may have been triggered by Trump’s tweet on the morning of Aug. 16: “THE FAKE NEWS MEDIA IS THE OPPOSITION PARTY. It is very bad for our Great Country. … BUT WE ARE WINNING!”

The FBI announced this week that they arrested a California man who threatened to shoot and kill Boston Globe employees in a series of phone calls in which he called them the “enemy of the people.”

So, how much impact has the newspapers’ coordinated series of editorials had? While the editorials were run only on one day and covered in subsequent TV news programs, Trump’s Twitter assaults on the media continue almost daily. He keeps up the attacks on the media in his rallies. In other words, the media is losing out to the president in terms of the frequency of their message.

The “recommend” functions in news apps are further deepening the divide among voters by guiding readers to only the stories they like — either conservative or liberal. Trump supporters won’t read the Boston Globe’s editorial the moment they see the title “Journalists are not the enemy.”

Amid this deep divide lacking in mutual dialogue, not only guarding freedom of the press but preventing racism, misogyny or attempts to treat immigrants as criminals will be a serious challenge.

The media in the United States are now confronted with perhaps their biggest crisis since the nation’s founding. It seems that the crisis won’t be overcome merely by the media preaching the importance of freedom of the press to protect democracy and saying that journalists are a trustworthy presence.


Keiko Tsuyama is a journalist based in New York. She has interviewed Mark Zuckerberg, Facebook CEO, and Kevin Systrom, founder of Instagram, for Japanese magazines.
Posted by geonni banner at 10:58 AM