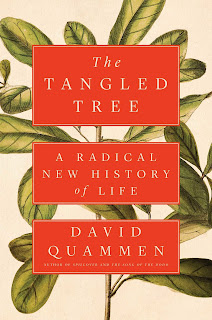 In 1837, Charles Darwin sketched a spindly tree of life in one of his notebooks. Its stick-figure trunk sprouted into four sets of branches. The drawing illustrated his radical idea that, over time, organisms change to give rise to new species.

“I think,” Darwin scrawled, suggestively, above his humble tree.

Biologists have worked since then to fill in the details of that tree. While all beings are related, Darwin intimated, it should be possible to classify all living things into distinct lineages of more closely related species — branches — based on their shared evolutionary histories.

Darwin and others used physical similarities and differences between organisms to add ever more details to his basic tree. Then, after the discovery of DNA’s structure in 1953, scientists began tracing the evolutionary history of life through its shared genetic code.

But that project has now reached a crisis point, David Quammen writes in his new book, “The Tangled Tree.” Genetics is revealing that the branches on Darwin’s tree of life are not so separate from each other as was once thought: Genes sometimes skip from species to unrelated species, effectively fusing different branches together. The big question now is whether Darwin’s tree represents a fundamentally flawed conception of evolutionary history or is merely in need of revision.

Quammen’s sprawling history of evolutionary genetics ranges widely in its answer to that question. He synthesizes a large quantity of disparate material, circling repeatedly back to one scientist in particular: Carl Woese, whose work both fleshed out Darwin’s tree and laid the foundations for its uprooting.

Woese, a biophysicist and microbiologist, was a pioneer in using genetic material to trace the history of life. Soon after setting up his first lab at the University of Illinois at Urbana-Champaign in 1964, Woese began working on the central biological question at the time: how cells translate genetic information into proteins. 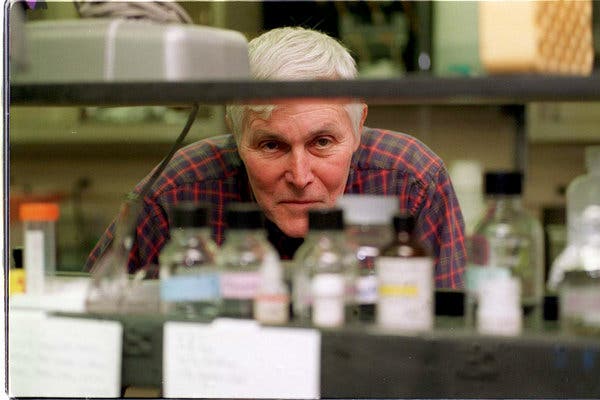 An elite group of 20 scientists — the RNA Tie Club, as they were known — had formed to discuss this problem. They met twice a year; members all wore identical embroidered neckties. Not Woese, Quammen writes: “He was a loner by disposition. He took a separate path. Not in the club. No RNA tie.”

Woese developed a new method to compare a type of genetic material called rRNA across bacterial species. In 1977, he revealed that he had successfully used this method to trace the path of bacterial evolution, finding an entirely new domain in the process — a whole branch of the tree of life that others had missed altogether.

At the time, scientists grouped all life into two main categories: the bacteria and the non-bacteria, or eukaryotes. Woese exploded that view. His research showed that there is a third group of organisms, the archaea, which are genetically distinct from other life-forms.

Previously, scientists had lumped the archaea in with the bacteria. Woese proved that archaea and bacteria had sufficiently divergent evolutionary histories to be considered different from one another.
Woese’s discovery was controversial at the time, though it is no longer. And his work laid the foundations for a new field of science called molecular phylogeny that has delivered astounding insights about evolutionary history.

Quammen details how scientists have now revealed genetic evidence that the branches of the tree of life are not so isolated from one another as Darwin thought. Organisms from different branches can transfer genes to each other — and often do.

Bacteria, plants and animals can swap genes across species lines, and this activity seems to have shaped evolution in profound ways. Scientists call this swapping “horizontal gene transfer,” to distinguish it from the “vertical gene transfer” that occurs between parents and offspring. Horizontal gene transfer explains why bacteria acquire resistance to antibiotics so quickly, for instance: They can transfer antibiotic resistance genes back and forth among species relatively easily.

But horizontal gene transfer also poses a major challenge to the Darwinian concept of evolution, in which species evolve over time into separate lineages. Darwin thought that evolutionary change happened very slowly, as incremental genetic changes were passed down, over hundreds of thousands of generations, from parents to children. And while this slow change does happen, gene-swapping via horizontal gene transfer happens much faster, driving major changes relatively quickly.

And if species are constantly swapping genes, perhaps different biological lineages are not distinct, disconnected branches on the tree of life. Instead, it may be time to prune the tree into a different shape: perhaps a web, or, as Quammen suggests, a topiary constructed of interlaced branches.

Quammen, one of science writing’s savviest stylists, is best when probing the human side of science. He began researching “The Tangled Tree” in 2013, the year after Woese died, and the book often feels like an attempt to afford Woese his rightful place in history.

Though Woese engaged in a fair amount of experimentation, he disapproved of what he called “technological adventurism” — the engineering approach to biology enabled by the invention of faster, cheaper methods for studying genetic information.

In 2004, for example, Woese condemned the 15-year, nearly $3 billion Human Genome Project, in which scientists read out the 3 billion “letters” of the human genetic code for the first time: “What a stunning example of a biology that operates from an engineering perspective, a biology that has no genuine guiding vision!” Woese wrote of the landmark endeavor.

Quammen also writes that Woese never got the recognition that he felt he deserved. Despite winning a MacArthur “genius grant” and a National Medal of Science, among other prestigious awards, he never won a Nobel Prize — science’s marquee honor. He became lonely and disgruntled near the end of his life and seems to have borne a particular grudge toward Darwin himself. Quammen even unearthed a telling piece of marginalia from Woese, who, while annotating a colleague’s scientific paper, wrote in all caps: “YOU ACCORD DARWIN SO MUCH MORE SUBSTANCE THAN THE BASTARD DESERVES.”

But if Quammen is writing for the ages, his prose at times risks feeling dated. His book spans nearly three centuries and mentions more than 160 scientists by name. Of those, by my count, only 11 are women, and Quammen often dismisses their scientific credentials and achievements or portrays them as appendages to men in the story.

Lynn Margulis, for instance, fundamentally revised our understanding of eukaryote evolution, elucidating how nature’s most complex cells, including our own, arose when simpler cells joined together. She is the only female scientist who is called out and gets significant space in Quammen’s book. But we hear just as much about her pregnancies, motherhood and marriages as we do about her science.

In contrast, Quammen doesn’t really spend equal time exploring the family arrangements of the male scientists in the book. It’s a classic failure of the Finkbeiner test, formulated by the journalist Christie Aschwanden, which posits that a female scientist’s gender is not her most salient characteristic. If scientists’ family lives are important, journalists should write about the families of both male and female scientists. Otherwise, we perpetuate the stereotype that a woman scientist’s primary responsibility is to care for her family, while men should float free from such pedestrian concerns in their pursuit of research.

There’s a weird tidbit along those lines late in the book, when Quammen writes that Woese once sent a colleague a letter inked with Woese’s “favorite rubber stamp.” The stamp read: “May a Band of Nomadic Barbers Gang-Lather Your Sister.” The inscription exhibits the sort of juvenile misogyny that might have seemed unremarkable back in the 1970s. But this would now qualify, at the very least, as creating a hostile work environment, and the episode, perhaps unwittingly, offers a sliver of insight into the generations of sexism that have made it difficult for women to succeed in science.

Quammen offers a readable and largely reliable Baedeker to a fast-moving and complex field of science that is as tangled as the tree of his title. He ultimately concludes that Darwin was not wrong, but that his tree of life was too simplistic. Yet, though Quammen shapes a truly fascinating tale, it’s clear that this story is not yet finished.

Erika Check Hayden is a science journalist and director of the Science Communication Program at the University of California, Santa Cruz.
Posted by geonni banner at 11:32 AM