Birds of Japan by Mark Brazil

‘Birds of Japan’: More than a guide, a labor of love

The birdwatching community here in Japan — and further afield, too — is all a-twitter about one of the latest books to fly out and land on their bookshelves. 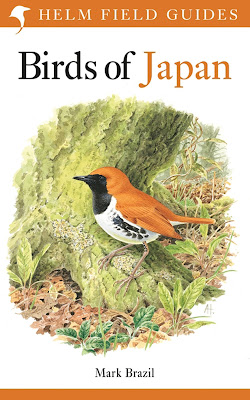 His previous book, “Birds of East Asia,” which broadly covered birds around the East Asia region, quickly became the go-to reference for the area and this new release is again a one-stop field guide, but one that deals solely with the diverse avifauna of Japan. The “official” list of species recorded across the archipelago stands at well over 600 species.

“Birds of Japan” follows the usual field guide format: distribution maps for most species, the English and Latin names — though strangely not a Japanese bird name in sight — then a concise write-up on salient identification marks and tips on how to separate one species from another in the case of birds of similar color and appearance.

Up to half a dozen species are described on each page, and the book contains 187 quality color plates depicting all manner of plumages: males and females, juveniles, different races/subspecies, and often an additional drawing of the birds in flight.

Brazil’s labor of love will be a birders’ Bible for the foreseeable future and will fill the niche for anyone who plans to search out the wealth of birds that this country has to offer.

Buy it used on Amazon for about 18 dollars.