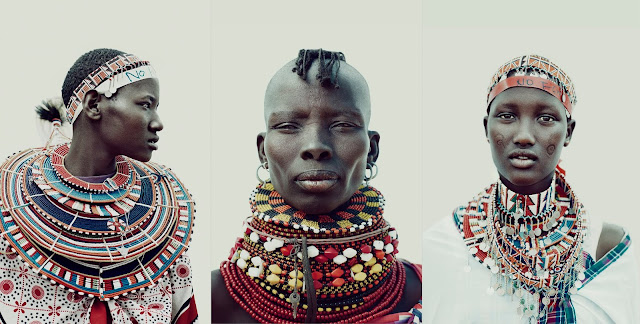 These Kenyan women are campaigning to improve sexual and reproductive rights in their communities. To try to stamp out female genital mutilation, they have developed alternative rites of passage ceremonies
For many girls and women in Africa, contraception and reproductive health services simply do not exist. A new mother dies every three minutes there, while many people still see female genital mutilation as a rite of passage. Among the organisations working to improve things is Amref Health Africa. Photographer Dean Bradshaw accompanied the charity to Kenya to meet some of the women it works with. Through his portraits, Bradshaw tried to capture the women as they wish to be seen: “proud, diverse, beautiful, empowered” – not as victims but as individuals

Nobody wants to feel helpless or desperate. The days of charities showing people as one-dimensional victims are – hopefully – numbered. Theo Sowa, chief executive of the African Women’s Development Fund, has said: “When people portray us as victims, they don’t want to ask about solutions. Because people don’t ask victims for solutions.”

These Kenyan girls and women have been asked. They are among the people who work with health development charity Amref Health Africa to try to make pregnancy safer and improve women’s access to reproductive health services.

One of the portraits is of 13-year-old Lilian, who bravely avoided female genital mutilation (FGM) by going to school where she knew she would be safe. Now, instead of simply getting married, which happens to so many girls after FGM, she dreams of being a pilot.

In the same region – Loitoktok, where there is a large Maasai community – Amref is helping local women develop alternative rites of passage ceremonies: rituals that maintain tradition without hurting girls.

“At first, we didn’t understand the importance of educating girls,” says mother-of-seven Anastacia Mashidana, chairwoman of the Enduet Women Group, which works with Amref. “We never realised it was harmful for girls to marry young, leave their education, give birth at home and get circumcised. It was normal. Now, we think differently.”

Already, some 16,000 girls in Kenya and Tanzania have avoided the cut by taking part in the alternative ceremonies. Women in the Loitoktok region are now being encouraged to give birth in hospital rather than at home, too.

It became obvious that older women needed to be brought on board if communities were to transition away from cutting.

“Without medical help, mothers and their babies often died,” notes Mashidana. “Now, we have retrained women who used to advocate home deliveries about the importance of hospital births and antenatal classes. Instead of cutting, older women now promote the benefits of staying in school and getting an education. Our vision is to see girls going to university, getting professional jobs and expertise. They have more opportunity than we did, and that is a great thing.”

The advice from the UK government’s Department for International Development is that lasting change will only come if it is locally built, managed and sustained, rather than holding people hostage to charity.

The years have helped staff understand local cultures and the realities on the ground, and Amref appears to comes closer than some NGOs to being a truly African organisation. Its headquarters are in Nairobi, Kenya, and it also runs country programmes in Ethiopia, South Africa, South Sudan, Tanzania and Uganda. Of its 1,000 employees, 93 per cent are African.


We never realised it was harmful for girls to marry young, leave their education, give birth at home and get circumcised. It was normal. Now, we think differently

In the Kenyan communities Amref has worked with, women say they are now feeling stronger. “Beforehand, women were not allowed to speak in front of men in meetings and we were not allowed to go to meetings in Nairobi,” says Mashidana. “Now, we talk publicly – even in front of the president. Our husbands, sons and brothers also work with us in our forums to promote women’s issues. Men have accepted that women play a big role.”

The men are right – in most communities in Kenya, it is the women who are gatekeepers to their communities’ health. “Women in this community are empowered now,” says Mashidana. “Our group is proof of the power that women can have.”

A long-term presence in this region, which lies near Mount Kilimanjaro and the Tanzanian border, means that Amref has gained enough trust to try to tackle FGM. Drawing on its trusted position, the organisation has helped local women develop alternative rites of passage ceremonies. These celebrate girlhood without harming girls and their reproductive health.

Magbahli, 41, member of a women’s group

“In our women’s group we tackle issues such as FGM and girls’ education. Groups like ours have stopped 1,000 girls getting circumcised. Women here are strong.”

Nankalayiai, 16, graduate of an alternative rites of passage ceremony

“It is good for children to stay in school. We learn and then we can pass on our knowledge to help our community. Before, the girls here had no choice. My sisters are all cut and married. It is difficult for them because their future isn’t bright like mine. They are always in great pain. In the future, I would like to work to stop FGM happening to other young girls.”

Lilian, 14, graduate of an alternative rites of passage ceremony

“My sisters were all married and faced the cut. I didn’t want to. I took myself to school, where it was safe. I feel positive about my future because I know I don’t have to leave school and get married. I can stay in education and get a good job. I want to be a pilot and work for Amref Flying Doctors.”

“I have delivered more than 100 babies. I am so proud to be a woman. Before, we didn’t know why we should stop FGM. I used to cut and I was cut, but now we have seen the negative impact. We have stopped and promote the good side of the alternative rites of passage ceremonies. That way, we get to keep the tradition and celebration, but we do not hurt our girls. We are moving from where we were to a better life. Our vision is for our girls to be safe, go to school and live better lives.”

Turkana County, north-west Kenya
Turkana is one of the poorest and most remote counties in Kenya. Trying to improve maternal services there would be futile without also trying to tackle the root causes of malnutrition, a huge issue in the region. After discussions with local women, a project of sustainable community farms was piloted, allowing women’s groups to feed their families as well as to sell surplus produce.

“The lifestyle is changing in this community for the better. We now know about the importance of business, water, education and hospitals.”

“As our crops grow, so does our outlook. Now our children have good nutrition, their future is bright.”

This article is featured in issue 94 of Positive News magazine.

Subscribe now to get the magazine delivered to your door four times a year.
Posted by geonni banner at 12:52 PM