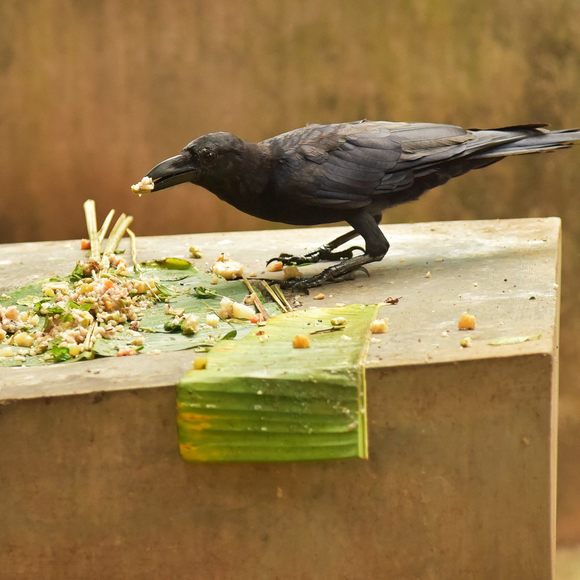 Feeding Crows for the Shradh

There are no crows to be seen. It is noon, and the sun is high in the sky in Chennai, India; two women carry a veritable feast in their arms eager to feed the crows, but there are none. “Caw, caw,” one woman mumbles, calling to the birds. When none respond, they take the banana leaf containing their feast—sugar-flecked kalkand rice, plain rice smothered in sambhar, yogurt, green gram dal, rice soaked in rasam, savory doughnuts called vadai, plantain chips, and semolina payasam—into the car. They wind their windows down and squint outside at treetops and at the sky, willing one crow to appear. Just one.

This is part of a Hindu ritual known as shradh, an annual rite conducted on a day known as the tithi, or the anniversary of a loved one’s death, calculated according to astrology and the Vedic calendar. Hindus believe that crows are the link between the worlds of the living and the dead; ancestors, it is said, visit the living in the form of a crow. Every year following a loved one’s death, the family cooks a feast filled with all of their relative’s favorite foods.

Each of them take turns to ladle the feast onto a banana leaf until they have all served something, and then the leaf is carefully carried outside. But sometimes, there are no crows, and that’s when a family must drive around looking for them. (Feeding a crow is considered auspicious and is practiced on all sorts of occasions, tied to all sorts of rituals.)

The shradh has concluded when a crow pecks at the feast and begins to eat. This signifies that the soul of the loved one is now satiated and is at peace.

Typically performed by the eldest son, daughters can perform the ritual if there are no sons, or if the son is absent.

Crows getting the initial share of the feast prepared on the first death anniversary (of the L & M’s mother).

In the old days, these crows with the grey band around their necks were chased away from such offering. Only the fully black ones were allowed to partake of the feast. It was believed that the dead returned as the latter to accept the lovingly prepared food. The crows with gray band were referred to as kalla-kaakka (liar crows) which made us children ask the (inevitable) question if the fully-black ones were ‘satya-kakka‘ (truthful crows)?!

Times have changed. There are fewer crows and it would not do for anyone to fuss and insist that only one type of crow is welcome. May be that’s why the kalla-kakkas of before are welcomed by most, accepted as the form the dear departed souls have assumed to return and accept their offerings.

Or maybe it is the departed souls who have made the compromise. Anyways, nowadays you find both types of crows are welcome to peck at the food lovingly prepared in honor of the dead souls.

But today we had another unexpected visitor apart from the expected crows: a hungry old woman.