Honeybees are under siege, straining the business of farming. Now growers are turning to other bee species to help their crops.

OMAK, Wash. — Jim Freese grows apples, pears and cherries on 45 acres in the north-central part of this state, on sagebrush-studded land his grandfather bought in 1910.

Walking among trees laden with shiny red cherries, Mr. Freese recalled that four years ago his trees were not producing well and his farm was financially struggling. Like many growers, he had been relying on rented honeybees to pollinate his cherry trees every spring, along with wild bees and other insects.

But that year, spring was expected to be cool. “Honeybees will just sit in the hive in cooler weather,” Mr. Freese said. He needed a way to ensure more flowers would develop into fruit than in the past.
At a horticulture meeting, he learned that blue orchard bees — a native species that doesn’t make honey or live in hives — could be used to supplement honeybee pollination. Blue orchard bees will fly at cooler temperatures.
Mr. Freese bought 12,000 cocoons and set them in his orchard to emerge when the trees bloomed. His investment paid off. “We doubled our cherry production from any previous record year,” he said.

His wife, Sandee Freese, said: “The little bees have been a godsend.”

The Freese orchard is one of many commercial agricultural operations around the United States considering pollination with alternative bee species now that the honeybee is beset by problems.
The honeybee, Apis mellifera, has been the dominant pollinator for decades but now is threatened by pesticides, pathogens, parasites and poor nutrition. Last year, beekeepers in the United States lost an estimated 40 percent of their managed honeybee colonies, according to the Bee Informed Partnership, a nonprofit that advises beekeepers. 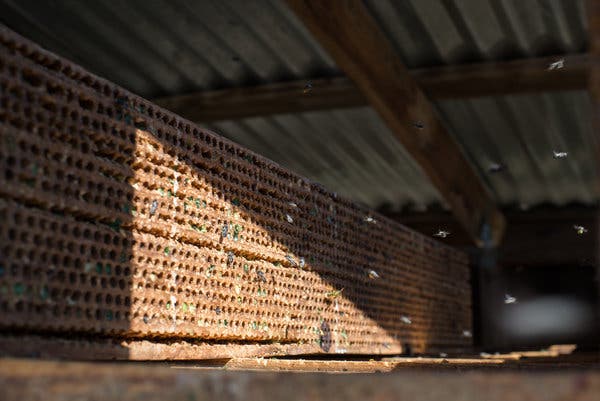 These losses drive up prices for farmers who rent honeybees to pollinate their crops, straining their businesses. Honeybee prices have nearly quadrupled since 2004, even as demand for pollination services is growing.

One-third of our food — including almonds, apples, blueberries, pears and tomatoes — must be pollinated in order to grow. Some scientists warn of risks to agricultural food supplies if there aren’t enough pollinators.

As honeybee prices continue to rise, farmers are turning to other types of bees — like the blue orchard bee, the bumblebee and alfalfa leafcutter — that have proven to be effective pollinators of some crops in certain settings.

“It’s a question of having the right bee at the right time,” said Theresa Pitts-Singer, a research entomologist at the Department of Agriculture’s Logan Bee Lab.

Dr. Pitts-Singer and researchers across the country have been studying how so-called integrated crop pollination — or combinations of varying bee species — can help growers ensure reliable pollination.
The Integrated Crop Pollination Project, a public-private partnership funded by the Department of Agriculture, has explored habitat enhancement for wild bees, improving farm management practices, and the use of diverse or “alternative” bee species.

Of the thousands of species of bees in North America, just four other than the honeybee are already used or almost ready for use on a commercial scale in the United States, according to a review published last year in Basic and Applied Ecology. (Wild bees also make important contributions to crop pollination.)

The bumblebee, Bombus impatiens, can be an effective alternative to honeybees for pollinating watermelons and lowbush blueberries. The alfalfa leafcutter bee, Megachile rotundata, is responsible for pollinating most of the alfalfa grown for seed production.

Blue orchard bees are natives to this continent, and were here long before Europeans arrived with honeybee hives. Pollination in large almond and cherry orchards increased when they were used alongside honeybees, recent studies showed. There’s a particular synergy between the two bee species, which have very different behaviors.

Honeybees forage widely, self-propagate and live in large colonies that are easy to move. Blue orchard bees are solitary, and all females function as both queens and workers. They fly about four to six weeks in early spring.
The two types of bees collect pollen differently — honeybees gather pollen only on their legs and blue orchard bees gather it with their abdomens, too. They also fly at different heights in the tree canopy.

Better pollination can lead to bigger yields, as in Mr. Freese’s case, which can mean more profit.
To explore the economics, Dr. Pitts-Singer and other scientists conducted a cost-benefit analysis of using blue orchard bees and honeybees to pollinate almond trees in California.

The analysis, published recently in Journal of Economic Entomology, showed a potential ten-fold increase in profit per acre with the introduction of blue orchard bees. Further study is needed to determine whether such an increase is possible in real-world settings, Dr. Pitts-Singer said.

Scientists noted that farmers would earn greater profits if they saved blue orchard bee progeny from year to year rather than buying new cocoons every season. That requires careful maintenance of nesting materials and cocoons to prevent disease.

In the wild, blue orchard bees make nests in small cracks or holes. But in agricultural settings, artificial nesting blocks or paper tubes are used.

For Mr. Freese, adopting blue orchard bees has meant learning how to care for them. He makes sure a supply of mud is nearby for females to build nests with, cleans the nesting materials and cocoons each winter, and keeps cocoons in a refrigerator until early spring.

“If I double my cherries, I’ll do the extra work,” Mr. Freese said.

Like honeybees, other bee species face risks from chemicals and pathogens. Farmers can support managed bees and attract wild pollinators by planting hedgerows and wildflowers and by reducing the use of pesticides, experts say.

Rufus Isaacs, professor of entomology at Michigan State University and director of the I.C.P. project, sums up bees’ needs this way: “Provide a house and food, and don’t kill them.”

With cherry and almond blooms lasting only a short time, bees in orchards need other flowering plants nearby for food.

As the interest in alternative bees increases, the Department of Agriculture is looking at how to prevent the transmission of pests and pathogens around the country, and at how well bees from, say, Washington State will do on the East Coast.

Effectiveness is the deciding factor. “You could say the most expensive pollinator is the one that doesn’t work,” he said.

His supplier, Jim Watts of Watts Solitary Bees in Bothell, Wash., has worked with leafcutter bees all his life and started propagating blue orchard bees a decade ago. While the blue orchard bee industry is very small, it is growing rapidly.

One of the largest distributors of solitary bees in the country, Mr. Watts meets with farmers throughout the West about pollination. Based on their crops and acreage, he provides bees, materials and consulting time to answer questions.

“There’s a learning curve the first year or two,” he said. “As people get better at it, they get a better return on their investment.”
“Our approach is to consider the possibility of increased yield but also risk management,” Mr. Watts added. “Two bees together work better. They pollinate differently. By diversifying your bees, you’ll get way more consistent pollination over time.”

Dr. Isaacs, of Michigan State, agrees that diversity is important for reliable results.

“Using wild bees and managed bees is an insurance policy against honeybee declines,” he said, adding that a suite of pollinators also hedges against weather extremes.

At a time when human food needs are growing and honeybees are threatened, farmers may be looking for just such an insurance policy.
Posted by geonni banner at 11:40 AM