What Is a Person, Anyway? 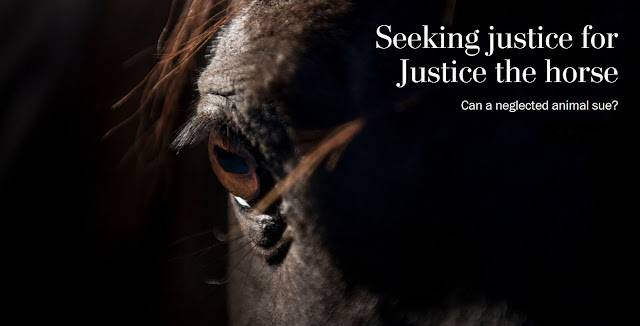 Justice is an 8-year-old American quarter horse who used to be named Shadow. And when he was named Shadow, he suffered. At a veterinarian’s exam last year, he was 300 pounds underweight, his black coat lice-ridden, his skin scabbed and his genitals so frostbitten that they might still require amputation.

The horse had been left outside and underfed by his previous owner, who last summer pleaded guilty to criminal neglect. And now Justice, who today resides with other rescued equines on a quiet wooded farm within view of Oregon’s Cascade mountains, is suing his former owner for negligence. In a lawsuit filed in his new name in a county court, the horse seeks at least $100,000 for veterinary care, as well as damages “for pain and suffering,” to fund a trust that would stay with him no matter who is his caretaker. Justice, front, shares a pasture in Estacada, Ore., with three other rescued horses: Lincoln, Badger and Flick. (Carolyn Van Houten/The Washington Post)
The complaint is the latest bid in a quixotic quest to get courts to recognize animals as plaintiffs, something supporters and critics alike say would be revolutionary. The few previous attempts — including a recent high-profile case over whether a monkey can own a copyright — have failed, with judges ruling in various ways that the nonhumans lacked legal standing to sue. But Justice’s case, the animal rights lawyers behind it contend, is built on court decisions and statutes that give it a stronger chance, particularly in a state with some of the nation’s most progressive animal protection laws.

“There have been a lot of efforts to try to get animals not only to be protected but to have the right to go to court when their rights are violated,” said Matthew Liebman, director of litigation at the Animal Legal Defense Fund, which filed the suit in Justice’s name. Those “haven’t found the right key to the courthouse door. And we’re hopeful that this is the key.”

These efforts have been made amid broad growth in legal protections and advocacy for animals. Three decades ago, few law schools offered courses in animal law; now, more than 150 do, and some states have created animal law prosecutorial units. All 50 states have enacted felony penalties for animal abuse. Connecticut last year became the first state to allow courts to appoint lawyers or law students as advocates in animal cruelty cases, in part because overburdened prosecutors were dismissing a majority of such cases.

These developments count as progress, animal rights lawyers say, in persuading lawmakers and courts to expand the traditional legal view of animals — as property — to reflect their role in a society in which dog-sitting is big business and divorces can involve cat custody battles.

“Our legislature acknowledged that people care a lot about animals, and that’s something that’s evolving and increasing,” said Jessica Rubin, a University of Connecticut law professor who serves as an advocate in that state’s cruelty cases. “The law, hopefully, is catching up to where our morals are.” 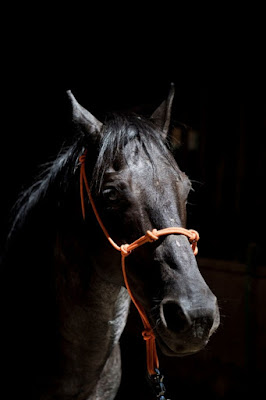 Justice stands in a barn at what may be a temporary home in Estacada. He is being housed by Kim Mosiman, who runs the organization Sound Equine Options. It takes in and finds new homes for about 100 horses each year. (Carolyn Van Houten/The Washington Post)
But expanding the protections for animals is quite different from granting them legal standing, which courts have not been willing to do. In 2004, a federal appeals court shot down a suit in the name of the world’s cetaceans, in which President Bush and Defense Secretary Donald H. Rumsfeld were sued over the U.S. Navy’s use of sonar. In 2012, a U.S. District Court dismissed a suit filed on behalf of five SeaWorld orcas, which argued that their captivity was a violation of the 13th Amendment’s prohibition on slavery. This spring, a federal appeals court ruled that a crested macaque that took its own photo could not sue for copyright protection, saying “this monkey — and all animals, since they are not human — lacks statutory standing under the Copyright Act.”

In New York courts, a group called the Nonhuman Rights Project has for several years sought writs of habeas corpus for captive chimpanzees, arguing that they are “legal persons” — a term that can apply to corporations and ships — and have a right to freedom. While judges have occasionally praised the effort, they have ultimately rejected it, saying chimpanzees cannot bear the duties and responsibilities required of legal persons.

Against that backdrop, Liebman says Justice’s case is “more reasonable” than the others. It does not involve the Constitution or historically weighted concepts such as slavery or a writ of habeas corpus. It’s not so, well, silly-sounding as copyright for a monkey.

Instead, he and colleagues say, it is a logical next step. Their argument goes like this: While some state cruelty laws were written to protect animal owners or public morals, Oregon’s anti-cruelty law makes plain it is intended to protect animals, which it calls “sentient beings.” What’s more, state courts have ruled that animals can be considered individual victims. And because victims have the right to sue their abusers, the lawsuit says, Justice should be able to sue his former owner.

Justice, of course, has no idea he is suing. Sarah Hanneken, an Animal Legal Defense Fund attorney in Portland, says that Justice’s ignorance of the lawsuit is irrelevant.

“This whole idea of somebody who has been injured by the acts of another and not being able to speak for themselves in court, so having an adult human do it for them, this is not new,” Hanneken said. “Children are allowed to bring lawsuits, because we recognize that children have interests that laws protect.” 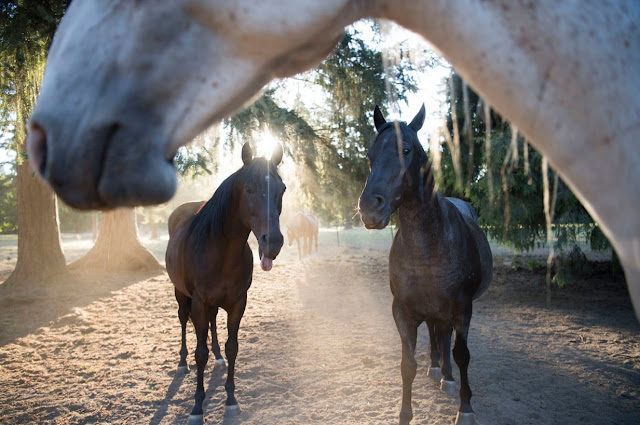 Justice and fellow rescued horses. A lawsuit filed in Justice’s name and demanding compensation for neglect is among a number of suits that have been brought in U.S. courts asserting personhood for animals. None has yet succeeded. (Carolyn Van Houten/The Washington Post)
According to court filings, Justice’s former owner, Gwendolyn Vercher, surrendered the horse to a rescue organization in March 2017 at the urging of a neighbor in Cornelius, west of Portland. In a letter to law enforcement, an equine veterinarian who examined the horse at the time said he was “severely emaciated,” lethargic and weak. That poor condition probably contributed to a lasting problem — the animal’s penis had prolapsed, and his inability to retract it led to frostbite, trauma and infection.

“When I got him, he was a lot worse than I anticipated,” said Kim Mosiman, executive director of Sound Equine Options, which takes in and finds homes for about 100 horses each year.

Justice, whom Mosiman fondly describes as “like a grumpy old man,” has gained weight and become more social. On a sun-soaked afternoon at the dusty farm in Estacada, he nibbled grass alongside a retired racehorse named Flick and used his nose to nudge the notebook of a visiting reporter. But the lawsuit says his penis may require partial amputation and that his medical conditions will demand long-term care.

“I’m trying to find someone who wants to adopt him,” Mosiman said. “But if they find out they’re going to have to be financially responsible for him, he’s never going anywhere.”

Some animal law experts warn that Justice’s lawsuit is extreme, even dangerous. Richard L. Cupp, a Pepperdine University law professor who has been critical of the chimpanzee personhood cases, said he thinks the horse case has even more radical implications.

Allowing Justice to sue could mean any animal protected under Oregon’s anti-cruelty statute  — a class that includes thousands of pets, zoo animals and even wildlife — could do the same, he said. (Livestock, lab animals, hunting targets, rodeo animals and invertebrates are exempted.) If this approach were adopted elsewhere, Cupp said, a stampede of animal litigation could overrun courts. 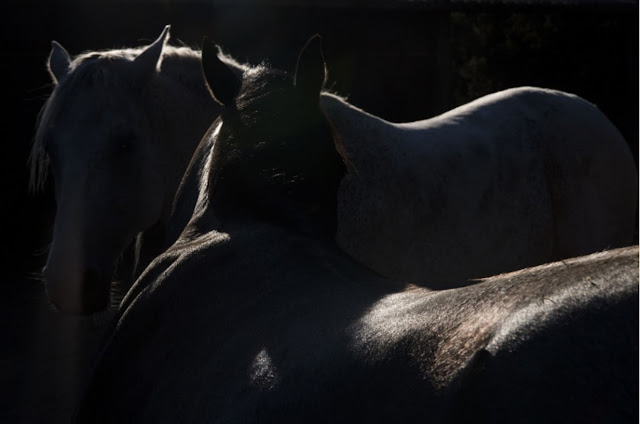 “There’s a massive chasm between saying a thing is a victim and saying now it must have rights, and the rights ... must include a right to sue,” said Geordie Duckler, an attorney representing Justice’s former owner. (Carolyn Van Houten/The Washington Post)
“Any case that could lead to billions of animals having the potential to file lawsuits is a shocker in the biggest way,” Cupp said. “Once you say a horse or dog or cat can personally sue over being abused, it’s not too big a jump to say, ‘Well, we’re kind of establishing that they’re legal persons with that. And legal persons can’t be eaten.’ ”

Cupp emphasized that he supports Oregon’s progressive animal cruelty laws and rulings. But legislation is a more reasonable way of expanding animal protections, he said. Justice’s case, for example, could be addressed through a law requiring an abuser to cover an animal’s future care. “This would not be bad for society,” Cupp said. “We do need to evolve. We’re not doing enough to protect animals.”

Cupp points to a Connecticut law as one that maintains an important distinction between animals and people. It focuses on “the interests of justice,” not the animals’ interests.

Geordie Duckler, a Portland animal law attorney who represents Vercher, said he views the horse lawsuit as a publicity stunt, one he does not expect Oregon courts to take very seriously.

“There’s a massive chasm between saying a thing is a victim and saying now it must have rights, and the rights are apparently the full panoply of rights, and must include a right to sue,” Duckler said. “There’s no such thing as a right in a vacuum. . . . As soon as you have animal rights, then you’d better have animal jails and prosecutions against animals.”

The slippery-slope arguments are familiar to Mosiman, who calls her group an animal welfare, not animal rights, organization. When she considered Justice’s long-term needs, though, she had no qualms about signing him up as a plaintiff, she said.

“It was pretty clear-cut: If he wasn’t starved, this wouldn’t have happened,” Mosiman said as Justice languidly scratched his neck and head against a towering pine tree. “It’s about him.”

But as lawyers on both sides of this issue agree, it’s about much more than that. “I’m trying to find someone who wants to adopt him,” Kim Mosiman said of Justice. “But if they find out they’re going to have to be financially responsible for him, he’s never going anywhere.” (Carolyn Van Houten/The Washington Post)
Posted by geonni banner at 10:35 AM